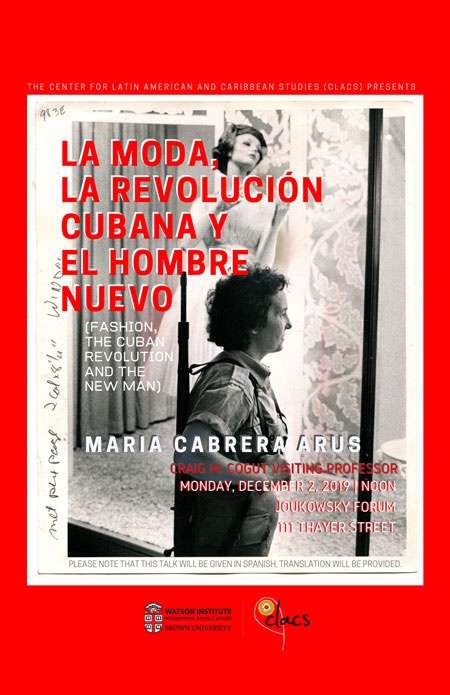 Please note that this talk will be given in Spanish. Translation will be provided.

María A. Cabrera Arús studies the impact of fashion and domestic material culture on regime stability and legitimation, especially in the Caribbean during the Cold War years. Her research has been published in or will appear in the peer-reviewed journals Kamchatka, Theory & Society, and Cuban Studies, and in anthologies, including New Histories of the Cuban Revolution (Duke University Press, forthcoming 2018). Her manuscript, Dressed for the Party: Fashion and Politics in Socialist Cuba, presents fashion as both a mechanism of impersonal rule and a locus where private identities are articulated both against and in harmony with political values. She is currently exploring the relationship between domestic space and political discourses and practices of domination in the Caribbean during Cold War. Cabrera Arús is the author of Cuba Material, a virtual archive of Cuban material culture from the Cold War era, which won a New Challenge Award for Social Innovation Award, and was co-curator the 2015 exhibitions Pioneros: Building Cuba’s Socialist Childhood, which was held in the Sheila C. Johnson Design Center at Parsons School of Design and, for Cabinet Magazine, Cuban Finotype and Its Materiality. She is currently a Visiting Scholar at the Center for Latin American and Caribbean Studies at NYU and, from 2016-2017, had a previous appointment as a Postdoctoral Research Fellow in the Sawyer Seminar “Cuban Futures Beyond the Market” at NYU’s King Juan Carlos I of Spain Center.