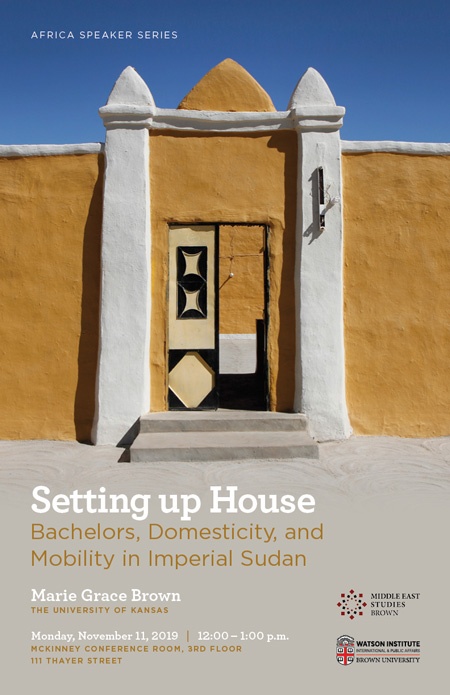 In the first half of the twentieth century, government policy and personal prejudices discouraged marriage for British officials working in the Anglo-Egyptian Sudan (1898-1956) and pushed domestic desires to the margins of imperial service. Moreover, a requisite annual three-month leave kept officials circulating between colony and metropole. The result was a community of “bachelor” administrators who struggled to maintain relationships with loved ones in Britain and construct the comforts of home in Sudan. These bachelor households, staffed by Sudanese male servants, were homosocial spaces of care-taking, affection, and misunderstanding. With an eye for small details and personal histories, Brown places intimacy at the center of the imperial experience and presents British men’s domestic desires as unexpected sites of vulnerability and negotiation.

Marie Grace Brown (Ph.D. University of Pennsylvania, 2012) is a cultural historian of the Modern Middle East with a special interest in questions of gender, empire, and the body as historical text.

Her award-winning book, Khartoum at Night: Fashion and Body Politics in Imperial Sudan (Stanford University Press, 2017), traces gestures, intimacies, and adornment to give a history of northern Sudanese women’s lives under imperial rule. It argues that Sudanese women used their bodies to mark and make meaning of their positions in shifting socio-political systems of tradition, nation, modernity, and global connection. The result is a highly participatory tale of empire, characterized by economic and cultural exchange, mobility and civic opportunity, and evolving measures of beauty and womanhood.

Brown’s second book-length project continues the exploration of the relationship between bodies and imperial power. Sex on the Edge: Adventures in Romance in Imperial Sudan examines the romantic behaviors of European women in Sudan in the first half of the twentieth century. It posits that the public roles of female imperialists were accented by private desires. The same women who surveilled, controlled, and reformed Sudanese bodies refused imperial authority over their own bodies; and, instead, eagerly sought out opportunities for romantic experimentation and play. The project highlights the compromises of the imperial state and recasts European women as unpredictable, desiring subjects whose bodies simultaneously constructed and challenged imperial order.

Brown’s work has been supported by grants from the American Association of University Women, the Social Science Research Council, and the Woodrow Wilson National Fellowship Foundation.