Michael A. Cohen – Clear and Present Safety: The World Has Never Been Better and Why That Matters to Americans 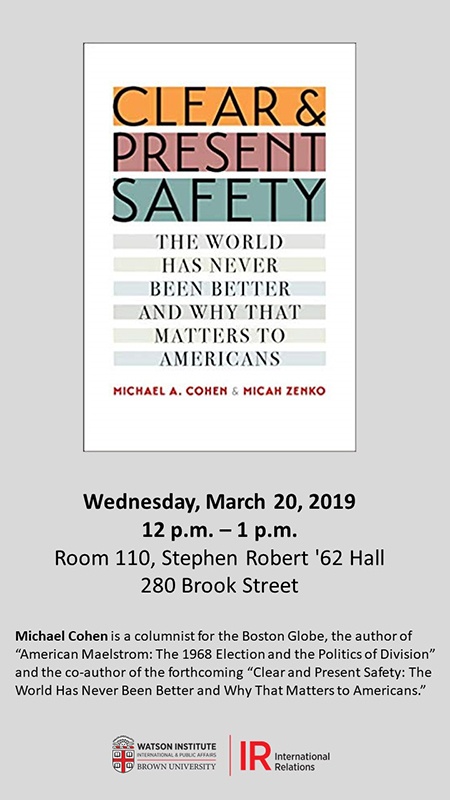 Why does America focus so much attention and resources on improbable foreign threats (like transnational terrorism, Iran, and North Korea), while comparatively underinvesting in reducing the harms, risks, and threats that are far more consequential and lethal to its citizens (from noncommunicable diseases, to drug overdoses, to hospital infections)? In addressing this question, Micah Zenko and Michael Cohen’s Clear and Present Safety details the once-unimaginable and sustained gains in human development around the world; the history, costs, and consequences of foreign threat inflation; and how to re-orient U.S. grand strategy to safeguard Americans from their actual and preventable domestic harms.

"Cohen and Zenko lay out a reality that’s purposefully been overlooked by all the paranoia peddlers invested in a dystopian alternative.” – Former Secretary of State John Kerry

“Cohen and Zenko make a strong case for an evidence-based look at the bright side, not to lift our moods (though that can be a happy by-product) but to realign our priorities.”—Steven Pinker, author of Enlightenment Now and The Better Angels of Our Nature

“The book is an urgent reminder that the business of threat-inflation is hazardous to our health and welfare, leading us to ignore more serious issues. Smart, incisive and full of revealing facts and statistics, it should be required reading not only for policy-makers but for all Americans.”—Rosa Brooks, Georgetown University

Michael Cohen is a columnist for the Boston Globe. He is also the author of “American Maelstrom: The 1968 Election and the Politics of Division” and the co-author of the forthcoming “Clear and Present Safety: The World Has Never Been Better and Why That Matters to Americans.” Michael has written about national politics and international affairs for dozens of news outlets, including as a columnist for the Guardian, Foreign Policy and World Politics Review. He previously worked as a speechwriter at the US State Department, has been a fellow at New America Foundation and the Century Foundation, and a lecturer at Columbia University’s School of International and Public Affairs.

Sponsored by the International Relations program