Michael R. Hoffman – Reinvented Toilet for the Developing World and Beyond: Addressing the Gates Foundation Challenge through Science and Engineering 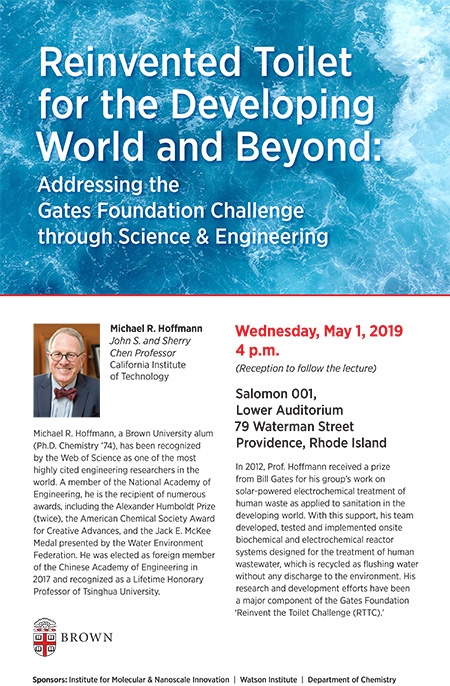 In 2012, Professor Hoffmann received a prize from Bill Gates for his group's work on solar-powered electrochemical treatment of human waste as applied to sanitation in the developing world. With this support, his team developed, tested and implemented onsite biochemical and electrochemical reactor systems designed for the treatment of human wastewater, which is recycled as flushing water without any discharge to the environment. His research and development efforts have been a major component of the Gates Foundation 'Reinvent the Toilet Challenge (RTTC).'

Michael R. Hoffmann, a Brown University alum (Ph.D. Chemistry '74), has been recognized by the Web of Science as one of the most highly cited engineering researchers in the world. A member of the National Academy of Engineering, he is the recipient of numberous awards, including the Alexander Humboldt Prize (twice), the American Chemical Society Award for Creative Advances, and the Jack E. McKee Medal presented by the Water Environment Federation. He was elected as a foreign member of the Chinese Academy of Engineering in 2017 and recognized as a Lifetime Honorary Professor of Tsinghua University.

Co-sponsored by the Institute for Molecular & Nanoscale Innovation, the Watson Institute, and the Department of Chemistry