Peter Green Lecture on the Modern Middle East with Niloofar Haeri – The Story of Moses and the Shepherd: Debating Non-Ritual Prayer in Iran 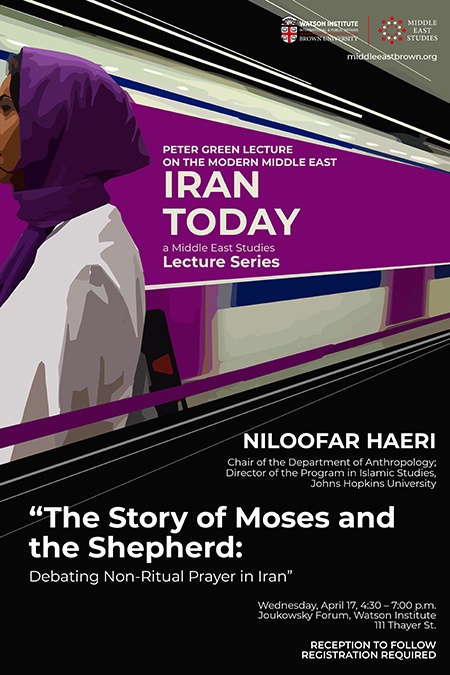 This presentation is based on several years of fieldwork among a group of Shi’a women in Tehran. Niloofar Haeri examines du’a (spontaneous prayer)—the discourses and debates surrounding it and the ways it is practiced. The story of Moses and the Shepherd offered an occasion a few years ago to clerics with ties to the state to debate the ideal relationship between worshippers, God and Moses (representing all prophets). And the ideal way in which God must be addressed.

Du’a is an exalted form of worship among Muslims and there is a vast literature concerning its virtues and necessity, and yet, within the social sciences it has received far less attention relative to the obligatory ritual prayer (salat/namaz) in the role it plays in Muslim subjectivity. Professor Haeri will offer examples of how God is addressed and show the importance of studying acts of du’a ethnographically.

Niloofar Haeri is Chair of the Department of Anthropology at Johns Hopkins University and Director of the Program in Islamic Studies. She received her B.A and Ph.D in Linguistics from the University of Pennsylvania. Her first book The Sociolinguistic Market of Cairo: Gender, Class and Education in Egypt (Kegan Paul International, 1996) pursued the question of the role of gender in language change in vernacular and Classical Arabic. Her second book Sacred Language, Ordinary People: Dilemmas of Culture and Politics in Egypt (Palgrave Macmillan US, 2003; published in Arabic in 2011) examined the implications of attempts since the 19th century to modernize Classical Arabic—a language primarily associated with the Qur’an.

She has edited volumes on Arabic linguistics; and on language modernization across the Muslim world. More recently, she has been writing on Iran. Her article on salat prayers (2013, Anthropological Quarterly) offers a detailed ethnography of the ways in which this ritual prayer is thought about and practiced by a group of educated women in Iran. She is the editor of a Special Section of the journal Hau: The Journal of Ethnographic Theory (2017) where the Protestant notion of sincerity is put in conversation with other religious traditions. Her forthcoming book explores how prayer and poetry are used as grounds for high stakes debates on who is a true Muslim—a debate that is omnipresent in the public sphere in post-revolutionary Iran. She is the recipient of a Guggenheim Fellowship (2015) and a Stanford Humanities Fellowship (2015) for her project on Iran.