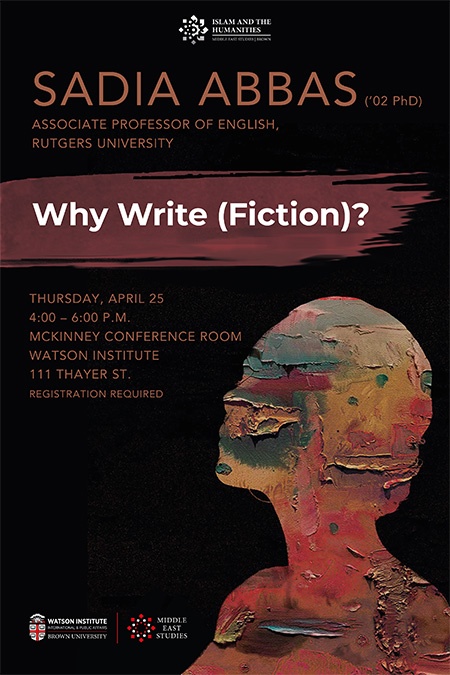 Registration is at capacity. Please join the waitlist if interested in attending.

An Islam and the Humanities seminar.

Audiences and interlocutors sometimes perceive an incongruity between writing both scholarly, critical works and fictional ones. People ask writers whether one prefers one to the other or whether one kind of writing is superior to the other, how the two are possible together, and whether there is some deep split which means both cannot be spoken of together. Questioners are rarely satisfied by the responses to such queries. In this talk, Professor Abbas will speak about both kinds of writing with reference to both her academic book At Freedom’s Limit: Islam and the Postcolonial Predicament (Fordham University Press 2014) and novel The Empty Room (Zubaan Books 2018). The larger stakes are connected to the status of form, writing and the status of theoretical thinking in our current moment.

Sadia Abbas (PhD '02) is associate professor of postcolonial studies at Rutgers University-Newark. She received her PhD from Brown University and her BA from Wellesley College. Professor Abbas specializes in postcolonial literature and theory, the culture and politics of Islam in modernity, early modern English literature—especially the literature of religious strife, and the history of twentieth-century criticism.

Her interests range from film, European perceptions of Europe’s own history and identity, Greek modernism, networks of cultural circulation in the Mediterranean, religion, theology and theory, the history of European Christianity, religious fundamentalisms, neoliberalism, the rise of the global right, contemporary British fiction, gender and religion to early Netherlandish and Renaissance painting and contemporary Pakistani art.

In addition to At Freedom’s Limit: Islam and the Postcolonial Predicament (co-winner of the MLA first book prize) and The Empty Room (a novel), she has authored numerous essays on subjects ranging from Jesuit poetics and Catholic martyrdom in Early Modern English poetry, neoliberalism and the Greek crisis, Pakistani art, the uses of Reformation in contemporary Muslim thought, to Jewish converts to Islam and treatments of subjectivity in contemporary theorizations of Muslim female agency. Professor Abbas has also written essays and opinion pieces for Dawn (the Pakistani daily), Naya Daur, Open Democracy, and TANK magazine, among others. At Rutgers, she directs the multi-media and multi-disciplinary series, Postcolonial Questions and Performances.