Slavery's Hinterlands: Capitalism and Bondage in Rhode Island and Across the Atlantic World 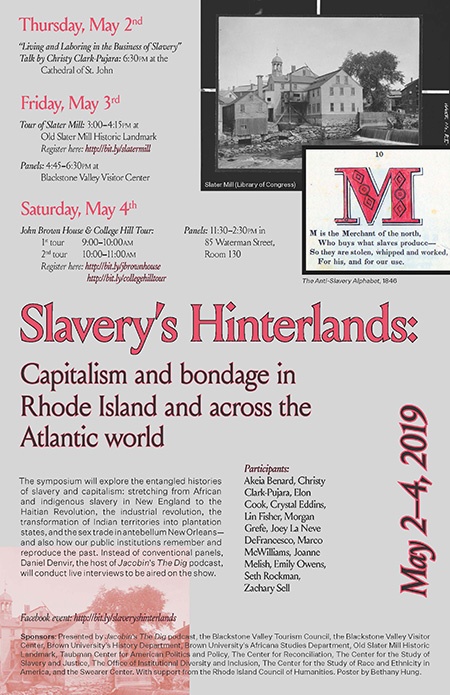 *All events are free and open to the public. Registration required for tours

“Slavery’s Hinterlands: Capitalism and Bondage in Rhode Island and Across the Atlantic World," a symposium, which will take place on May 3 and May 4 (including a talk the evening of May 2), will include tours of the Old Slater Mill historic landmark, the John Brown House Museum, and College Hill, and live interviews with academic and public historians conducted by Daniel Denvir to be aired on Jacobin’s The Dig podcast. Note that the tours are free but require registration in advance because capacity is limited. If you have any questions about the symposium, please reach out to julia_rock@brown.edu.

Slavery’s Hinterlands is a two-day symposium gathering academic and public historians to explore American slavery as it was: not merely the South’s “peculiar” institution but a core feature of American capitalism and empire; a critical facet of the industrial revolution, territorial expansion, and native dispossession that made the United States the most powerful nation on earth. The symposium compels us to rethink the geography of American slavery, not merely where it took place but also where the fruits of human bondage were reaped.

Tiny Rhode Island offers vital insight: After nearly a century of selling indigenous captives into Caribbean slavery, Rhode Islanders turned their attention to the transatlantic slave trade in the 18th century, generating unprecedented prosperity in Newport and Providence. After independence, the state was the site of the country’s first mills and factory villages, rendering the white sons and daughters of the New England countryside into hyper-exploited factory laborers weaving the raw materials picked by expropriated African slave labor into finished goods. Indeed, the intertwined economies of plantation slavery with New England shipping and industry built some of Rhode Island’s most important institutions, including Brown University. Might it make sense to see New England as a node in the Atlantic plantation complex, as a remote but indispensable outpost in a broader system of human commodification, and ultimately as slavery's hinterland?

The event will explore the entangled histories of slavery and capitalism: stretching from African and indigenous slavery in New England to the Haitian Revolution, the industrial revolution, the transformation of Indian territories into plantation states, and the sex trade in antebellum New Orleans—and also how our public institutions remember and reproduce the past.

Presented by Jacobin’s The Dig podcast, The Center for Reconciliation, and Brown University’s History Department, Taubman Center for American Politics and Policy, Center for the Study of Slavery and Justice, Office of Institutional Diversity and Inclusion, Center for the Study of Race and Ethnicity in America, Department of Africana Studies, and Swearer Center, Blackstone Valley Tourism Council, Blackstone Valley Visitor Center and Old Slater Mill National Historic Landmark. With support from the Rhode Island Council of Humanities.

Christy Clark-Pujara, Associate Professor of History at the University of Wisconsin and author of Dark Work: The Business of Slavery in Rhode Island, will be speaking about her work on the history of enslaved African Americans in areas that historians have not sufficiently examined – including here in Rhode Island.

Joey La Neve DeFrancesco, public historian and program developer, and member of Providence’s own punk rock band Downtown Boys will be leading a tour of Slater Mill –– the first successful cotton mill in the United States. The tour will explore early mill worker resistance, as well as the interconnected development of slavery and industrial capitalism. Registration is required.

Linford Fisher, Associate Professor of History at Brown University, will speak about his work on indigenous enslavement across the Atlantic World, and the relationship between native enslavement, empire-building, and land dispossession across British America.

Christy Clark-Pujara, Associate Professor of History at the University of Wisconsin and author of Dark Work: The Business of Slavery in Rhode Island, and Joanne Melish, visiting scholar in American Studies at Brown University, will be speaking about Black labor and slavery in the making of Rhode Island.

Marco McWilliams, founding director of the Engaged Black History and Justice Scholars Program, and Elon Cook Lee will each lead a walking tour of College Hill starting at 9:00 AM and 10:00 AM, starting at the John Brown House Museum. The tours will explore the sites in the College Hill neighborhood shaped by the history of slavery and Black people, free and enslaved, in Rhode Island. Registration is required.

Morgan Grefe, Executive Director of the Rhode Island Historical Society, will be leading two tours of the John Brown House Museum starting at 9:00 AM and 10:00 AM. John Brown made his fortune in the West Indian trade and transatlantic slave trade and went on to become one of Rhode Island’s wealthiest merchants and politicians. The tour will explore slavery, the American Revolution, and Rhode Island’s role in the nation’s early history. Registration is required.

Emily Owens, Assistant Professor of History at Brown University, will be speaking about her work on the histories of slavery and sexuality. Owens is currently working on a book about the women of color who were sold to the sex trade in antebellum New Orleans.

This panel will feature four public historians and public scholars who will be discussing their work on how teachers and public institutions remember and reproduce the histories of slavery. Akeia Benard is the curator of social history at the New Bedford Whaling Museum, Joey La Neve DeFrancesco is a public historian and program developer, Elon Cook Lee is the program director and museum curator at the Center for Reconciliation, and Marco McWilliams is the founding director of the Engaged Black History and Justice Scholars Program.

Seth Rockman, Associate Professor of History at Brown University, will be speaking about his work on the relationships between southern plantation slavery and industrial labor in northern states, including Rhode Island. The interview will examine slavery’s central role in the development of global and American capitalism.

In a final panel, all of the symposium’s speakers will have the opportunity to participate in a dialogue with one another to bring the ideas and histories presented over the course of the weekend into conversation.