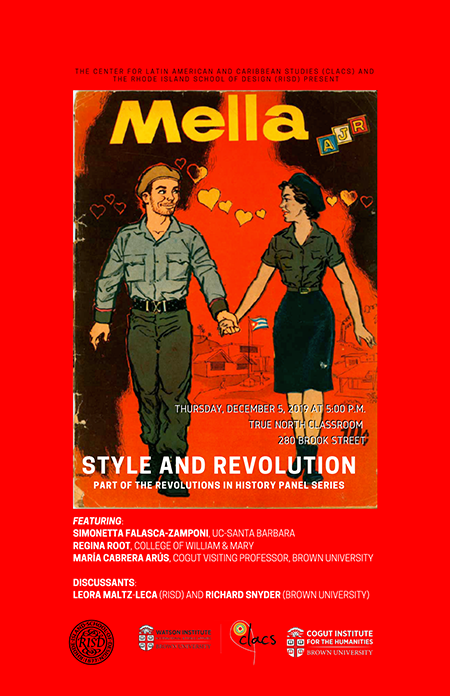 This event is sponsored by the Center for Latin American and Caribbean Studies (CLACS) at Brown University and the Rhode Island School of Design (RISD).

Falasca-Zamponi's intellectual and research interests mainly fall within the areas of politics and culture. More specifically, she is concerned with studying the political as a site of cultural discourse, cultural identity, and cultural production. Her book, Fascist Spectacle: The Aesthetics of Power in Mussolini’s Italy, for example, employed the category of “aesthetic politics” to analyze the role that symbolic discourse -- in the guise of myths, rituals, images and speeches – played in the making of the fascist regime and the construction of Mussolini’s power. The book she recently completed, Rethinking the Political: The Sacred, Aesthetic Politics, and the Collège de Sociologie, in contrast, utilizes the notion of the “sacred” to explore the influence of Durkheimian sociology upon 1930s French analyses of the nature of politics and the “crisis of democracy.” Through the case study of the Collège, with all the issues and controversies that it raised, the book intends both to reflect upon and generate theories about the relationship between the sacred, community, power and democratic institutions.

Dr. Regina A. Root is an international expert of design practices and cultural production. She has authored, edited and collaborated on numerous works. Reviewers have pointed to The Latin American Fashion Reader as the first book to take a broad look at the influence of Latin American culture on global fashion trends. Couture and Consensus: Fashion and Political Culture in Postcolonial Argentina was recently revised and translated into Spanish as Vestir la nación. The Handbook of Fashion Studies, in collaboration with other experts, presents an overview of the field’s history, methodologies, and current debates. She serves on various editorial boards and has guest edited or co-edited special volumes on the topics of Ecofashion, Latin American Fashion Now, and Brazilian Fashion. Pasado de Moda: Expresión cultural y consumo en la Argentina recently united two separate volume proposals for a multi-disciplinary collaboration on Argentina’s fashion chronology.

María A. Cabrera Arús, Ph.D. (Sociology, New School for Social Research), studies the impact of fashion and domestic material culture on regime stability and legitimation, with a geographical focus on the Caribbean region during the Cold War. Her research has been published in peer-reviewed journals, including Theory & Society,Contexts, and Cuban Studies, and book anthologies, including The Revolution from Within and the forthcoming The Oxford Handbook of Communist Visual Cultures. Cabrera Arús is also the author of the New Challenge Award for Social Innovation winning project Cuba Material, an archive of Cuban material culture from the Cold War era, and co-curator of the exhibitions Pioneros: Building Cuba’s Socialist Childhood in the Sheila C. Johnson Design Center at Parsons School of Design (September 17 – October 1, 2015) and Cuban Finotype and Its Materiality, at Cabinet magazine (October 21, 2015).