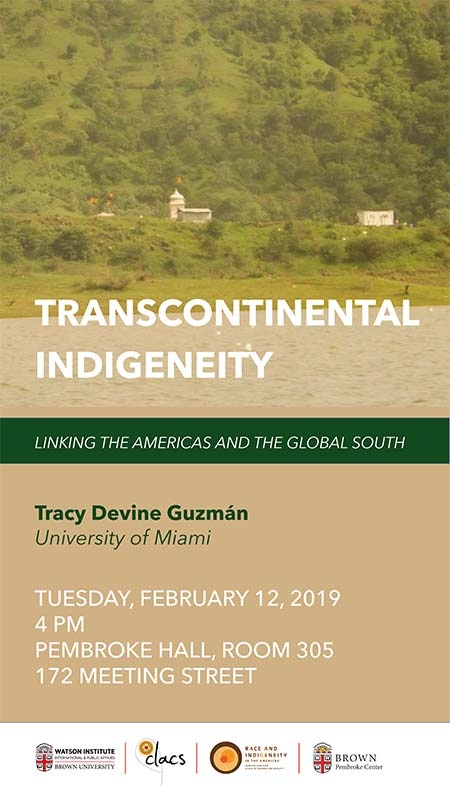 In the decades following the U.N. declaration of the “Year of Indigenous Peoples” in 1993, the indigenous movement that emerged across the Americas and the global South has centered largely on shared anxieties over the impact of unchecked developmentalism—particularly on communities who reside inside contested territories. Emphasizing the centrality of sacred lands to indigenous welfare, Native activists and scholars from across the globe have joined forces with a network of allies in lamenting prevailing models of economic growth and the consolidation of the Anthropocene.

Devine Guzmán studies this transcontinental activism and related cultural production, emphasizing the connections between human and environmental wellbeing. Considering distinct notions of indigeneity from the Americas and South Asia as they relate to bodies of water and contiguous lands, she argues that current debates regarding the steep ecological price of capitalist modernization were foregrounded long ago by Native communities struggling to survive the dual imperatives of “citizenship” and “progress.”

While these efforts vary in terms of local and national impact, they share a common desire to combine ancestral knowledge and modern technologies in their critique of dominant sovereignty paradigms. Considering 21st-century, global challenges simultaneously from modern and traditional indigenous perspectives, they aim to foster more tolerant and sustainable relationships among distinct peoples, and between human and non-human worlds.

Tracy Devine Guzmán is Associate Professor of Latin American Studies at the University of Miami.