Worlding the World of Art: A Conversation between Latin America and Asia with Florencia Malbran and Natasha Ginwala 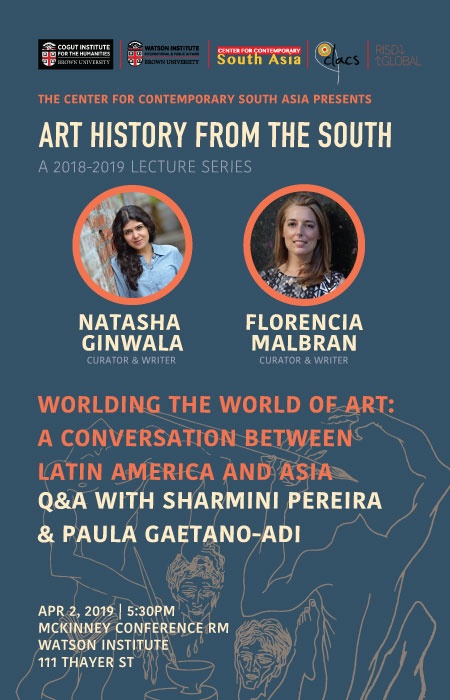 Florencia Malbrán is a curator of contemporary art who has organized exhibitions in the United States, Argentina, Canada, Brazil, Colombia, and Paraguay. Additionally, as a curator, she has been in residence in France, Switzerland, and Spain. She was the Hilla Rebay International Fellow at the Guggenheim Museums in New York, Bilbao, and Venice, and held positions previously at the Museum of Modern Art in Buenos Aires and the Pinacoteca do Estado in São Paulo. Her shows have been reviewed in Clarín and La Nación in Argentina, O Globo in Brazil, El Tiempo in Colombia, and Artforum in the United States, and has written widely for catalogues on contemporary art from Latin America.

Malbrán has been a faculty member at New York University in Buenos Aires since 2010. She also teaches at NYU’s Gallatin School of Individualized Study in New York City. In 2017, she was Craig M. Cogur Visiting Professor in Latin American and Caribbean Studies at Brown University. Her areas of expertise include contemporary art, curatorial practice, Latin American art history, and critical theory. In addition, she works in the fields of post-colonial and globalization studies, cultural geography and translation, focusing on the disciplinary problems of writing and practicing art across cultural boundaries, and proposing novel intertwining histories of the verbal and the visual.

Natasha Ginwala is a curator and writer. She has been curator of Contour Biennale 8 Polyphonic Worlds: Justice as Medium and curatorial advisor for documenta 14 (2017). Recent projects include My East is Your West (an initiative of the Gujral Foundation) featuring Shilpa Gupta and Rashid Rana at the 56th Venice Biennale; Still Against the Sky featuring Hajra Waheed at KW Institute for Contemporary Art, Berlin, and Corruption...Everybody Knows with e-flux, New York within the framework of the SUPERCOMMUNITY project. Ginwala was a member of the artistic team for the 8th Berlin Biennale for Contemporary Art (with Juan A. Gaitán) and has curated The Museum of Rhythm at Taipei Biennial 2012 (with Anselm Franke) and at Muzeum Sztuki (with Daniel Muzyczuk). From 2013–15 she led the multi-part curatorial project Landings with Vivian Ziherl. Her upcoming projects include Riots: Slow Cancellation of the Future at ifa-Galerie, Berlin and Stuttgart in 2018. Ginwala writes on contemporary art and visual culture in various periodicals and has contributed to numerous publications.