Bolivia On the Brink: Natural Resources, the War on Drugs, and the Future of Democracy 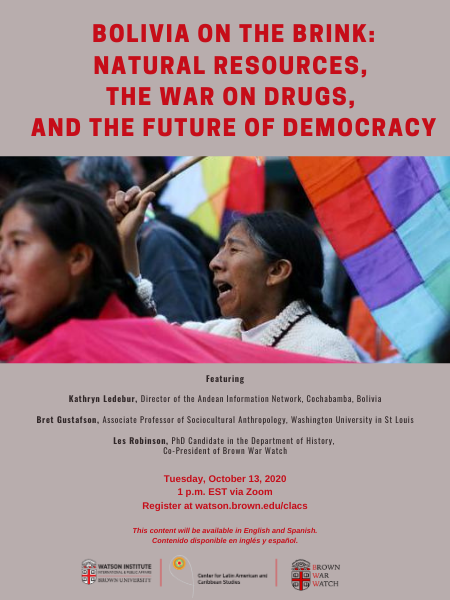 Bret Gustafson is Associate Professor of Sociocultural Anthropology at Washington University in St. Louis. Gustafson’s work focuses on the anthropology of politics and the political, with a particular interest in Latin American social movements, state transformation, and the politics of development. His research has engaged Indigenous movements in both Bolivia and Guatemala. He is the author of, Bolivia in the Age of Gas, recently published by Duke University Press (September, 2020). In this new book, Gustafson explores how the struggle over natural gas has reshaped Bolivia, along with the rise, and ultimate fall, of the country's first Indigenous-led government. Though grounded in the unique complexities of Bolivia, the volume argues that fossil-fuel political economies worldwide are central to the reproduction of militarism and racial capitalism. His first book, New Languages of the State: Indigenous Resurgence and the Politics of Knowledge in Bolivia (2009) was also published by Duke University Press. He is the co-editor of, Remapping Bolivia: Resources, Territory and Indigeneity in a Plurinational State (SAR Press, 2011), and Rethinking Intellectuals in Latin America (Vervuert, 2010). He has published in Latin American Perspectives, Anthropological Quarterly, Journal of Latin American and Caribbean Anthropology among other peer review scholarly journals.

Kathryn Ledebur is the director of Cochabamba-based policy think-tank, the Andean Information Network (AIN), and a visiting fellow at the University of Reading, UK. She is an expert on international drug policy, human rights, alternative coca and drug control strategies. Ledebur has written extensively for the Washington Office on Latin America (WOLA) and North American Congress on Latin America (NACLA), and published in Stability: International Journal of Security & Development. AIN provides information and analysis to NGO colleagues, the media, and international policymakers on developments in Bolivia and the impact of U.S. government and European policies. Working closely with civil society organizations in Latin America and in the United States, AIN promotes policy dialogue and the development of pragmatic alternatives that address the underlying economic, social, political and cultural needs of Bolivia.

Les Robinson is a PhD Candidate in the Department of History, and Co-President of Brown War Watch.