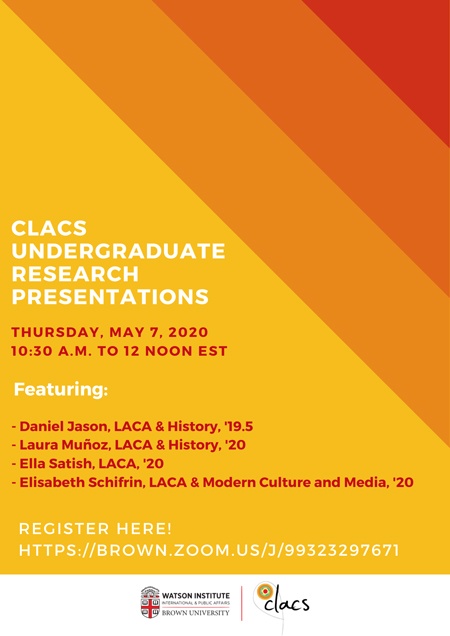 Daniel Jason '19.5 is a senior concentrating in History and Latin American and Caribbean Studies, focusing on education and literature. As a passionate Conosureño fueled by time with his grandparents and listening to Chilean Rock & Roll, he brings his fervor for Latin American culture and education to classrooms whenever he can. His experience as an Instructional Design Assistant at the School of Professional Studies, in which he reviews and helps design online courses, and as an education consultant for various schools around the country always draws back to his love of learning Latin American history. During his spare time, you can find him playing the Cajon at various outings, participating in food drives for Food Not Bombs Providence (which aims to provide food for the homeless), and listening to more Chilean Rock & Roll.

Laura Muñoz '20 is a senior double-concentrating in Latin American and Caribbean Studies and History. Born in Cuba and raised in Miami, Laura grew up in a community where Cuba and its politics were always present. At Brown, she has had the opportunity to focus her studies on the island to better understand its present state. Laura spent the spring 2019 semester in Havana with the Brown/CASA Cuba program. On campus she is a proud member of Alpha Chi Omega sorority and participated in the Brown Elementary Afterschool Mentoring (BEAM) program. Laura is the incoming Stephen M. Rivers Fellow at the Center for Democracy in the Americas in Washington, DC where she will be working on US-Cuba policy to promote engagement and the normalization of relations between both countries.

Ella Satish '20 is a first-generation student concentrating in Latin American and Caribbean Studies. She is a member of the Engaged Scholars Program and of Brown’s Program in Liberal Medical Education. Ella spent Fall 2018 in Cuba for a semester abroad and returned in January 2020 with a research grant to conduct ethnographic fieldwork for this thesis. Outside of academics, Ella has been a member of the Women’s Club Basketball team since freshman year. She is a freshman peer advisor with the Meiklejohn Program and is also involved with the Brown Center for Students of Color. Ella enjoys working within the Providence community: She participates in the Brown Elementary Afterschool Mentoring (BEAM) program with the Swearer Center as an after school teacher at WIlliam D’abate Elementary School in Olneyville and also teaches K-12 with the Aerie Program at the Wheeler School. Ella works as a teaching assistant in an English-Language Learning classroom at Lillian Feinstein Elementary School in Elmwood. Apart from teaching, Ella is a cervical cancer educator at Clínica Esperanza in Olneyville, a free clinic for the uninsured and also provides medical interpretation for the women’s clinic. She is very passionate about practicing reciprocal relationships within community engagement and making academic knowledge accessible to community members to work to uplift marginalized groups. Ella was recently accepted for a Fulbright teaching award in Colombia for next year and as an Exceptional Student for the Brown Alumni Magazine (June publication).

Elisabeth Schifrin '20 is a graduating senior at Brown from Montclair, New Jersey. She is double concentrating in Latin American and Caribbean Studies and Modern Culture and Media. These two areas of focus converge in her honors thesis film, a self-critiquing documentary that aims to expose the narrative conventions that shape Western audiences’ understanding of indigenous people of the Amazon. Elisabeth’s early passion for learning languages as well as her connection to her late Peruvian grandmother, who was a middle school Spanish teacher, motivated her studies of Spanish throughout high school. When she got to Brown, classes like The Art of Revolution in Latin America, Pop Culture in Latin America and the Caribbean, and Introducción a la lingüística hispánica expanded her curiosity from Spanish language to social, cultural, and political issues in the Spanish-speaking world. In the summer after her sophomore year, Elisabeth interned in the Peruvian Amazon as the videographer of Alianza Arkana, a grassroots organization that supports indigenous Shipibo people and their efforts to conserve their environment. In the spring of her junior year, Elisabeth studied at Casa de las Americas and La Universidad de la Habana in Havana, Cuba with Brown’s CASA program. Through art and cinema classes both in Cuba and at Brown, she has studied the ways in which culture functions to spread ideas that further revolutions and socio-political change. Outside of class, Elisabeth was the Director of Photography for Brown Motion Pictures’s first bilingual film, Siempre sale el tren, and has worked as an English conversation partner for international students. Elisabeth also loves dance, singing, writing, animation, dream psychoanalysis, and fashion.