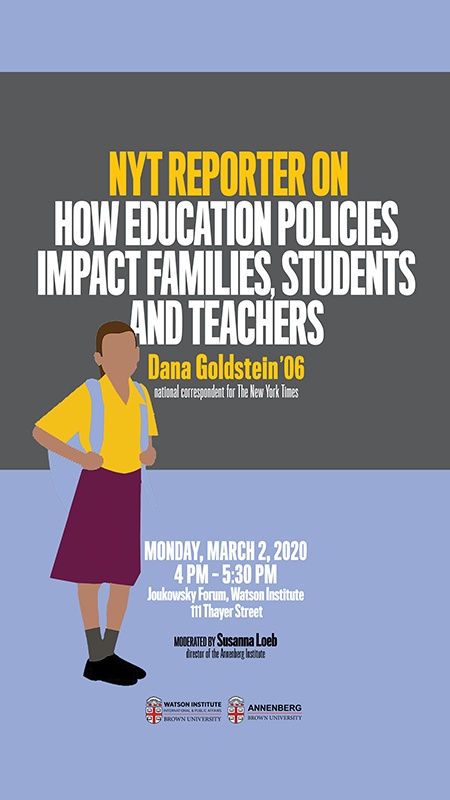 NYT Education Reporter discusses her coverage of college admission, segregation/integration, and her path from Brown.  Susanna Loeb, director of the Annenberg Institute, will lead the conversation with Dana Goldstein.

Co-sponsored by the Annenberg Institute

Dana Goldstein is a national correspondent for The New York Times.  She is the author of the bestselling “The Teacher Wars: A History of America's Most Embattled Profession,” and a two-time finalist for The Livingston Award.  Since joining The Times in 2017, she has covered the teacher walkout movement, changes in how students are selected for gifted programs and debates over school segregation, writing instruction, pre-K teaching methods and private school vouchers.  Previously, she was a reporter for The Marshall Project, covering criminal justice, and a contributor to Slate and The Atlantic. She began her journalism career as a writer and editor at The American Prospect, where she covered the 2008 presidential campaign.

Susanna Loeb is the Director of the Annenberg Institute at Brown University and Professor of Education and Professor of International and Public Affairs. Susanna's research focuses broadly on education policy and it's role in improving educational opportunities for students.  Her work has addressed issues of educator career choices and professional development, of school finance and governance, and of early childhood systems.  Before moving to Brown, Susanna was the Barnett Family Professor of Education at Stanford University. She was the founding director of the Center for Education Policy at Stanford and co-director of Policy Analysis for California Education. Susanna led the research for both Getting Down to Facts projects for California schools. She has been a member of the National Board for Education Sciences, a senior fellow at the Stanford Institute for Economic Policy Research, and a faculty research fellow at the National Bureau of Economic Research.