David McCourt — American Hegemony and the Rise of China: Experts, Culture, and U.S. National Security in the Asia-Pacific since 1972 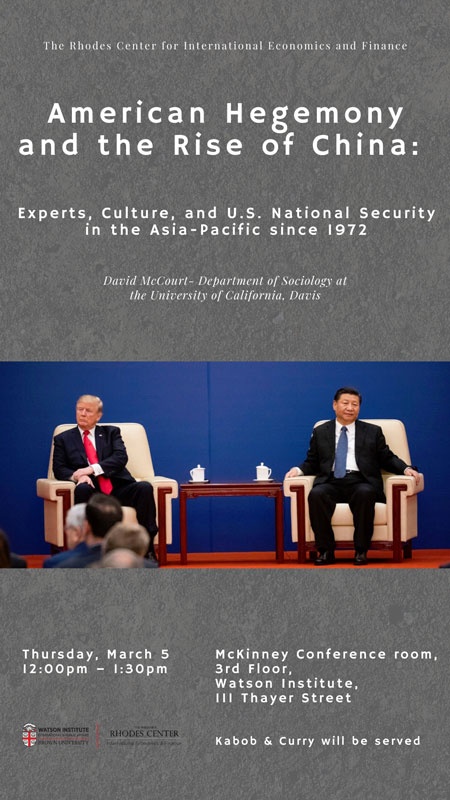 Between 2016 and 2018, relations between the United States and China transformed from a basis of engagement to competition bordering on threat. China’s position in US foreign policy has in turn shifted from a long-term opportunity to a pressing problem, dictating military structure, defense procurement, and subsuming China-related issues—from industrial espionage to the mass detention of Muslims in Xianjing—under a master frame of looming conflict. The 2015 and 2017 US National Security Strategies offer a stark illustration: in the former the US and China are potential partners; in the latter China is a “geopolitical challenger.” The election of China-critic Donald Trump in 2016 and broader shifts in geopolitical power from West to East loom large in existing understandings. Speaker David M. McCourt will show that neither can fully explain recent events. Instead, he traces the downturn in US-China relations to the community of China experts and the struggle over the production of authoritative knowledge on China for the American state.

Drawing on over 120 original interviews—from current and former diplomats to leading China scholars — McCourt takes the reader into the world of the “China watchers,” an expert community convulsed by the seeming failure of the long-standing policy of Engagement, which sought to integrate Beijing into the Western world order. He shows that Engagement was more than a strategy; it justified the dominance in the China expert community of a particular network of scholars, think tankers, diplomats, and business leaders professionally invested in ever-deepening relations between the US and China. Since 2016, the political and intellectual creators of Engagement have lost control of the reigning narrative that gave Engagement meaning, and the connections to the US government that gave it political power. In the anti-expert context of today’s Washington, pro-Engagement positions—both scholarly and political—have become politicized, leaving US China policy under the direction of those with no intellectual or professional investment in good relations with China.

Presenting an intimate account of America’s response to China’s growth in power, McCourt shows that understanding US-China relations today requires more than a grasp of the supposedly timeless verities of great power rise and decline. Melding insights from the sociology of experts, culture, and politics with constructivist approaches to international relations, American Hegemony and the Rise of China places US political culture and the specificities of the American state central to the interpretation of China’s rise and its implications for US foreign policy.