The End of White Politics: How to Heal Our Liberal Divide 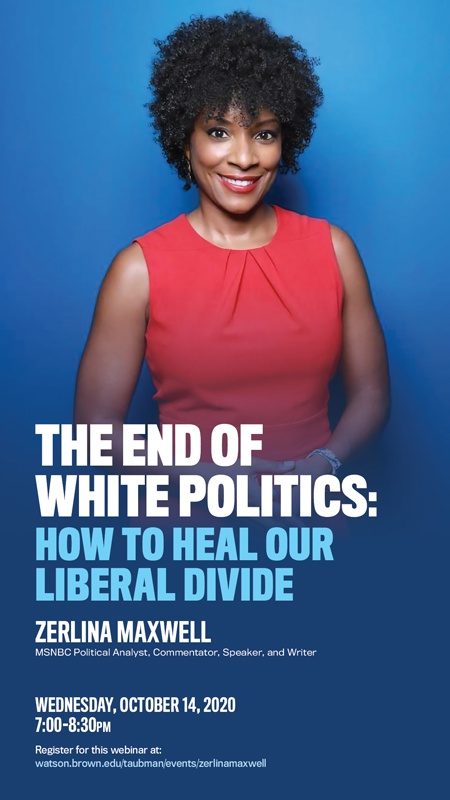 The times-and the demographics-are changing, and in order for progressive politics to prevail, we must acknowledge our shortcomings, take ownership of our flaws, and do everything in our power to level the playing field for all Americans. "The End of White Politics: How to Heal Our Liberal Divide" shows exactly how and why progressives can lean into identity politics, empowering marginalized groups, and uniting under a common vision that will benefit us all.

Zerlina Maxwell is the Director of Progressive Programming for SiriusXM and a Political Analyst for NBC/MSNBC. She was the Director of Progressive Media for Hillary Clinton's 2016 presidential campaign. She worked in the campaign's press office pitching coverage to progressive media outlets and curating daily messaging for online influencers. She also acted as a campaign spokesperson for the Presidential Debates.

She is also a speaker, and writer for a variety of national media outlets. Her writing focused on national politics, candidates, and specific policy and culture issues including race, feminism, domestic violence, sexual assault, victim blaming and gender inequality. She has consulted with the United States Department of State to promote the use of social media by students in the West Bank and is a frequent speaker at colleges, universities, and organizations. Zerlina is one of the most influential speakers and writers on the issues of campus sexual assault and rape culture in the United States.

In 2016, Zerlina joined pop superstar Lady Gaga on stage at the 88th annual Academy Awards as part of a special performance of her nominated smash, Til' It Happens to You from the film The Hunting Ground. Zerlina has been profiled in the New York Times as a top political twitter voice to follow during the 2012 election season and she was selected by TIME as one of the best Twitter feeds in 2014. In 2015, Zerlina was also one of five journalists invited to travel on Air Force One with President Obama on his trip to Selma for the 50th anniversary of Bloody Sunday.

Zerlina's has hosted live political and celebrity interviews for The Huffington Post and her writing has appeared in The New York Daily News, The Washington Post, JET Magazine, Marie Claire Magazine, on theGrio.com, BET.com, Feministing.com, CNN.com, and in other mainstream media outlets.

She has a law degree from Rutgers Law School - Newark and a B.A. in International Relations from Tufts University.