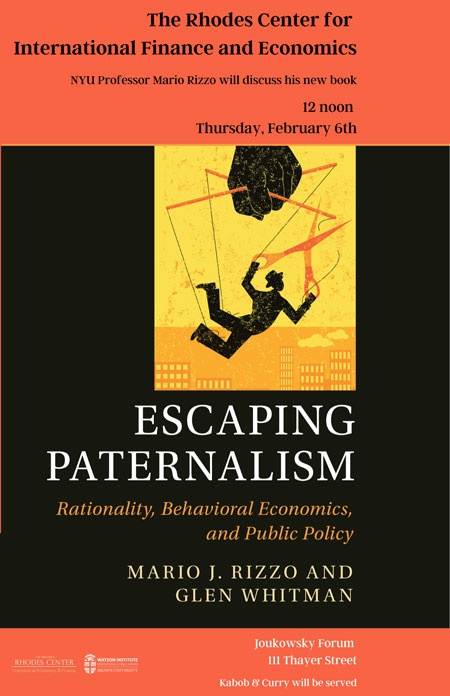 The burgeoning field of behavioral economics has produced a new set of justifications for paternalism. This book challenges behavioral paternalism on multiple levels, from the abstract and conceptual to the pragmatic and applied. Behavioral paternalism relies on a needlessly restrictive definition of rational behavior. It neglects nonstandard preferences, experimentation, and self-discovery. It relies on behavioral research that is often incomplete and unreliable. It demands a level of knowledge from policymakers that they cannot reasonably obtain. It assumes a political process largely immune to the effects of ignorance, irrationality, and the influence of special interests and moralists. Overall, behavioral paternalism underestimates the capacity of people to solve their own problems, while overestimating the ability of experts and policymakers to design beneficial interventions. The authors argue instead for a more inclusive theory of rationality in policymaking.

Mario J. Rizzo, Associate Professor of Economics, Director of the Foundations of the Market Economy Program at New York University.

His research is grounded on four fundamental premises: (1) the decentralization of knowledge in a complex society, such as ours, is important in the explanation of both economic and social phenomena; (2) human action should be understood in a contextual way -- both the individual and social context is needed to to make sense of what people do and how they relate to one another; (3) these phenomena are, wherever possible, best viewed as processes in time; and (4) economic and social policies usually have important unintended consequences. His central interests are in the interfaces between philosophy and economics, law and economics, and ethics and economics. Rizzo believes that philosophy is a more important sister discipline to economics than mathematics. Accordingly, the methods applied in his work reflect this.