Evelyn Farkas — The Legacy of the Trump Foreign Policy 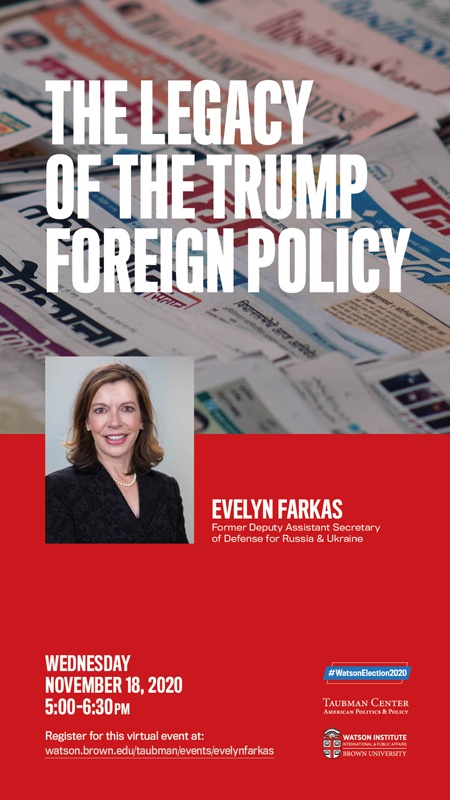 Dr. Evelyn N. Farkas has three decades of experience working on national security and foreign policy in the U.S. executive, legislative branch, private sector and for international organizations overseas. In 2019-2020 she ran to represent New York’s 17th Congressional District in the House of Representatives. She is currently President, Farkas Global Strategies. Prior to that she was Senior Fellow at the German Marshall Fund of the United State and the Atlantic Council and National Security Contributor for NBC/MSNBC.

She served from 2012 to 2015 as Deputy Assistant Secretary of Defense for Russia/Ukraine/Eurasia, Balkans, Caucasus and conventional arms control. From 2010 to 2012 she was Senior Advisor to the Supreme Allied Commander Europe and Special Advisor to the Secretary of Defense for the NATO Summit. Prior to that, she was Executive Director of the Commission on the Prevention of Weapons of Mass Destruction Proliferation and Terrorism and senior fellow at the American Security Project. From 2001 to 2008, she served as a Professional Staff Member of the Senate Armed Services Committee responsible for Asia Pacific, Western Hemisphere, Special Operations Command, and policy issues including combatting terrorism, and export control.

From 1997-2001 Farkas was a professor of international relations at the U.S. Marine Corps Command and Staff College. She served 1996-97 in Bosnia with the Organization for Security and Cooperation in Europe (OSCE). She has published numerous journal articles and opinion pieces including "Fractured States and U.S. Foreign Policy: Iraq, Ethiopia, and Bosnia in the 1990s" (Palgrave/St. Martin’s Press). She speaks Hungarian and German, has studied French, Spanish, Serbo-Croatian, Russian and Hindi.

Dr. Farkas obtained her MA and Ph.D. from The Fletcher School of Law and Diplomacy. She is a member of the Council on Foreign Relations and of the Board of Trustees of Franklin & Marshall College.