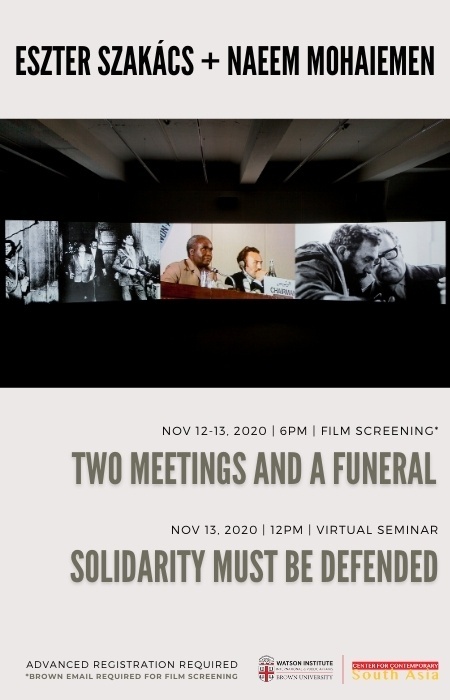 Register here for the film screening.

Naeem Mohaiemen combines films, installations, and essays to research socialist utopia, malleable borders, and unreliable memory. His projects often start from Bangladesh’s two postcolonial markers (1947, 1971) and then radiate outward to unlikely, and unstable, transnational alliances. Projects have shown at Chobi Mela, Tate Britain, MoMA, documenta 14, and the Venice Biennale. He is author of Midnight’s Third Child  (Nokta, forthcoming) and Prisoners of Shothik Itihash (Kunsthalle Basel, 2014); editor of Between Ashes and Hope: Chittagong Hill Tracts in the Blind Spot of Bangladesh Nationalism (Drishtipat, 2010); co-editor (w/ Eszter Szakacs) of Solidarity Must be Defended (Tranzit/ Van Abbe/ Salt/ Tricontinental, 2020); and co-editor (w/ Lorenzo Fusi) of System Error: War is a Force that Gives us Meaning (Sylvana, 2007). Mohaiemen is a Mellon Research Scholar, Society of Fellows & Heyman Center for the Humanities at Columbia University, New York. Join us for Naeem's talk, "Solidarity Must Be Defended," on Friday, November 13th, 2020 at 12pm.

About Two Meetings and a Funeral:
Marxist historian Vijay Prashad writes, in his book on third world liberation movements: “The Third World was not a place, but a project.” This was a utopian forum where the global South hoped to reconfigure planetary leadership, ending Euro-American dominance. The Third World project failed not only because of external enemies, but also due to its tragic mistake of a 1970s pivot from socialism to Islamism as unifying ideology.

Traveling through the residue of “gigantism” in transnational architecture (Niemeyer, Moretti, Le Corbusier) in Algiers, Dhaka, and New York, and in conversation with Vijay Prashad, Samia Zennadi, Atef Berredjem, Amirul Islam, and Zonayed Saki, the film explores the tension between the Nonaligned Movement (NAM) and Organization for Islamic Cooperation (OIC). Three-channel Film | 89 mins | 2017

*This screening is limited to the Brown community, however, registration for the seminar with Eszter Szakács and Naeem Mohaiemen is open to the public.