Gema Kloppe-Santamaría ─ In the Vortex of Violence: Lynching and State Formation in Postrevolutionary Mexico 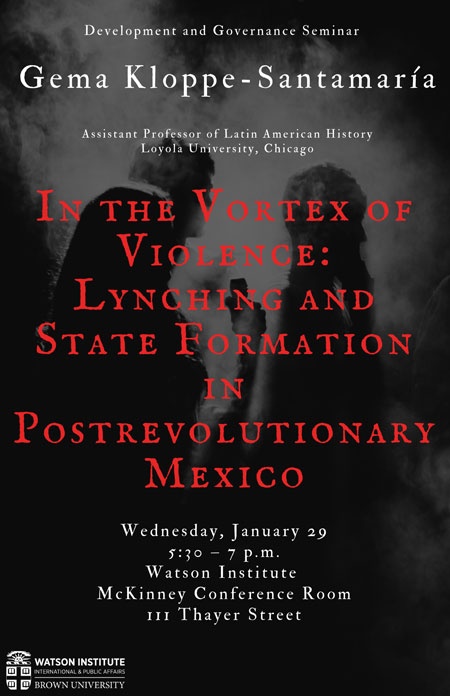 The aim of this presentation is to examine the impact that Mexico’s process of state formation had in the organization and legitimation of lynching. Drawing on several cases of mob violence taking place during the post-revolutionary period, I will examine three modalities of lynching that involved state actors and local authorities, either as victims or as perpetrators of mob violence. These modalities, which can be classified into three main categories - lynching as resistance, lynching as corrective justice, and state-sanctioned lynching – reveal particular patterns of resistance and negotiation between communities and the state, as well as specific patters of hegemony and coercion on behalf of state actors. I argue that counter to what classic sociological theories would predict, these modalities suggest that the greater presence of state authorities at the local level did not bring about a decrease in extralegal, overt, and public forms of violence. Rather, it was conducive to the occurrence and legitimation of lynching in the eyes of communities that perceived state authorities as intrusive, unfair, or incapable of providing the type of justice citizens deemed fit to punish crimes and social transgressions.

Gema Kloppe-Santamaría is assistant professor of Latin American history at Loyola University, Chicago. Her research analyzes the history of Latin American processes of state building across the 20th and 21st centuries, with a particular attention to questions of violence, crime, justice, and the rule of law.

Dr. Santamaría is working on the book manuscript “In the Vortex of Violence: Lynching, Extralegal Justice, and the State in Post-Revolutionary Mexico,” which traces the social and historical motives behind the persistence of lynching—a public, illegal, and particularly cruel form of violence. Her project also examines Mexico’s process of state formation as well as communities’ conceptions of justice, morality, and social order