CANCELED: James Bennet ─ News vs. Opinion: The Role of the Editorial Page 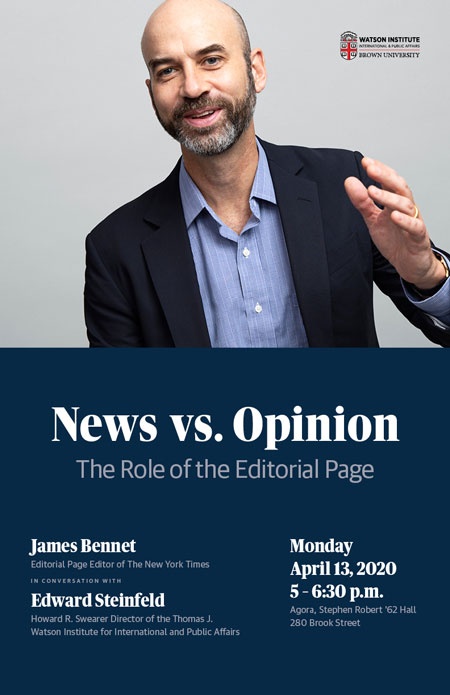 This event will be rescheduled in the Fall semester.

Join James Bennet, editorial page editor of The New York Times for a conversation with Watson Institute director Edward Steinfeld on the role of the editorial page in today's news cycle.

James Bennet, the editorial page editor of The New York Times, is in charge of the paper’s opinion pages, both in the newspaper and online. He oversees the editorial board, the Letters and Op-Ed departments, as well as the Editorial and Op-Ed sections of NYTimes.com.

Mr. Bennet became editorial page editor in May 2016. Before joining The Times, Mr. Bennet was the president and editor in chief of The Atlantic. Under Mr. Bennet, who was named editor in 2006, The Atlantic substantially increased its editorial reach and impact while returning to profitability for the first time in recent history. Adweek and Ad Age named Mr. Bennet editor of the year in 2012 and 2009 respectively, and the magazine was honored with the National Magazine Award four times during his tenure, including Magazine of the Year and best website, for TheAtlantic.com.