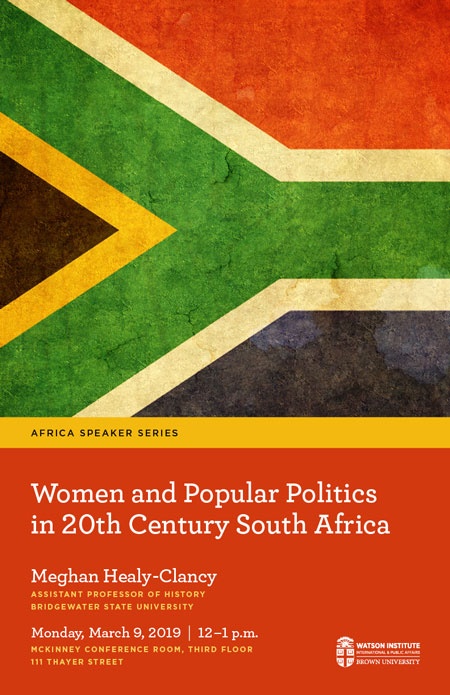 In support of our community's continued health, if you are not feeling well for any reason, please consider staying home rather than attending the event. For up-to-date information, including campus travel restrictions, please visit the University’s COVID-19 Updates website.

This presentation examines the history and historiography of women’s engagement in popular politics in twentieth-century South Africa. Over the first half of the century, women’s combination of marginality from male-dominated politics and centrality to social life made women critical to a range of grassroots movements. Feminist scholars have demonstrated how contending visions of nationalism aimed at transforming the state through not only moments of protest, but also everyday transformations of social institutions. Women became central to both apartheid state-building and anti-apartheid politics, often by organizing in ways that shared much with older forms of organization: most strikingly, they continued to mobilize as mothers. While women’s grassroots activism enabled the survival of the anti-apartheid movement, an entrenched history of male leadership worked to women’s disadvantage in the democratic transition.

Meghan Healy-Clancy is a social historian of modern southern Africa. At BSU, she teaches sub-Saharan African history from the medieval period through the recent past, and world history since 1500. She has published extensively on gender, culture, and politics in South Africa, and is the author of A World of Their Own: A History of South African Women’s Education (Reconsiderations in Southern African History Series, University of Virginia Press, 2014). Her research on women in the anti-apartheid movement has been recognized with the 2017 Catharine Stimpson Prize for Outstanding Feminist Scholarship from Signs: Journal of Women in Culture and Society (University of Chicago Press). She holds a PhD in African Studies (2011) and an MA in History (2007) from Harvard University, and a BA in History from the University of Chicago (2005).