Narges Bajoghli — Understanding Iran and the IRGC: Beyond the Headlines 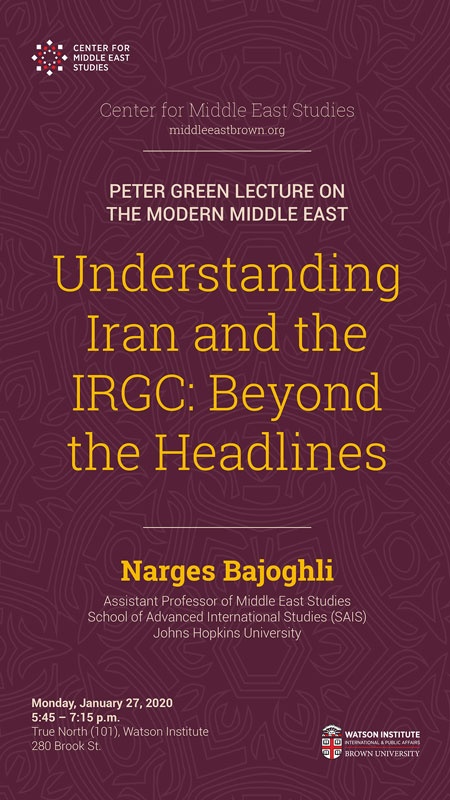 More than half of Iran's citizens were not alive at the time of the 1979 Revolution. Now entering its fifth decade in power, the Iranian regime faces the paradox of any successful revolution: how to transmit the commitments of its political project to the next generation. In today's political climate, this seems increasingly fraught. Over ten years, Narges Bajoghli met with men in Iran's Revolutionary Guard, Ansar Hezbollah, and Basij paramilitary organizations to investigate how their media producers developed strategies to court Iranian youth. Her research provides unprecedented access to those who wield power in Iran as they debate and define the future of the Republic. She moves beyond simplistic depictions of the IRGC and the paramilitary groups they control, to offer an in-depth understanding of Iran's most powerful military force, and the organization at the center of headlines in international politics today. She offers a multilayered story about what it means to be pro-regime in the Islamic Republic, challenging everything we think we know about Iran and revolution.

Narges Bajoghli is assistant professor of Middle East studies at the School of Advanced International Studies (SAIS), Johns Hopkins University. She is an award-winning anthropologist, filmmaker, and writer. Her academic research focuses on the intersections of media, power, and military in Iran. Her research focuses on pro-regime cultural producers in Iran, and is based on ethnographic research with Basij, Ansar-e Hezbollah, and Revolutionary Guard media producers in Iran. The resulting book, Iran Reframed: Anxieties of Power in the Islamic Republic, was published by Stanford University Press in 2019.

Narges received her PhD in socio-cultural anthropology from New York University, where her dissertation was awarded the Dean's Outstanding Dissertation Award in the Social Sciences. She was also trained as a documentary filmmaker in NYU's Culture and Media Program. Her research in Iran was supported by research grants from the Social Science Research Council, the National Science Foundation (awarded/declined), The Wenner Gren Foundation for Anthropological Research, the American Institute of Iranian Studies, and NYU's Torch Fellowship. Subsequently, for write-up, her project was awarded a Dean’s Dissertation Fellowship from New York University and she was concurrently a Fellow at the Center for Humanities at New York University.

For her second book project, Narges is focusing on chemical warfare in the Middle East. She is the director of The Skin That Burns, a documentary film about survivors of chemical warfare in Iran, distributed by Film Media Group. The film has screened in The Hague, Hiroshima, Jaipur, Tehran, and in the U.S. (New York, New Orleans, New Jersey, Chicago, and Irvine), at festivals and university campuses. She has also directed oral history projects on survivors of chemical weapons in Iran.

In addition to her academic writing, she has also written for The New York Times Magazine, The Guardian, The Washington Post, Al Monitor, Middle East Research and Information Project (MERIP), The Huffington Post, and LobeLog. She has also appeared as a guest commentator on Iranian politics on DemocracyNow!, NPR, BBC WorldService, BBC NewsHour, and PBS NewsHour.