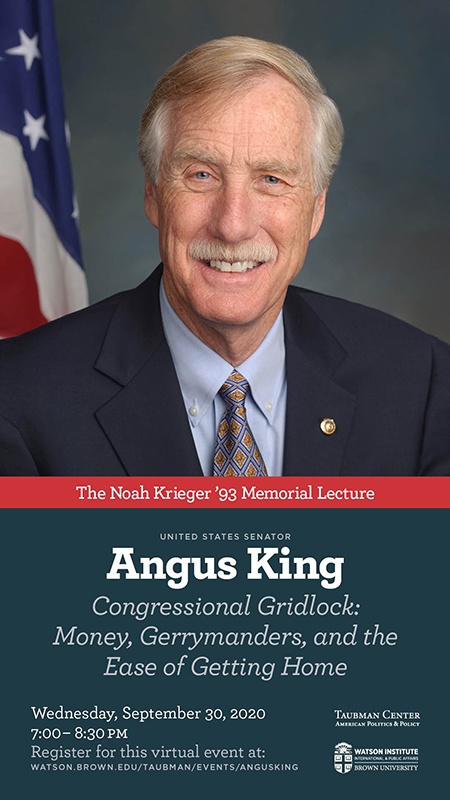 As a Senate staffer in the 1970s, Angus King had a front-row seat to how the institution worked. Now, as one of only two independent U.S. Senators, he sees firsthand how it seems to be breaking down. From the rising cost of elections to the lack of personal relationships, Senator King will discuss some of the challenges that prevent bipartisan work from getting done in the World’s Greatest Deliberative Body, and share his personal efforts to bridge the divide through consensus, faith, and BBQ ribs.

A strong believer in the need for greater bipartisan dialogue and relationship building, Senator King is proud to join the long line of thoughtful, independent leaders from the State of Maine, and he works hard every day to bring Republicans and Democrats together to find common-sense solutions for Maine and America. He is a proven consensus-builder who “calls ‘em like he sees ‘em”, putting civility and respect ahead of political ideology.

In his time in the Senate, Senator King has worked to strengthen America’s national security, conducted critical oversight of the nation’s Intelligence Community, supported common-sense budget priorities that promote prosperity and reduce the national debt, fought the national opioid and heroin epidemic, coordinated efforts to revitalize Maine’s forest economy, advocated for policies that contribute to cleaner, cheaper energy and mitigate climate change, railed against the corrosive effect of unchecked money in politics, fought to improve access to health care, worked to strengthen the government’s support of veterans, and promoted increased access to critical community resources like rural broadband.

Senator King has achieved significant legislative victories since taking office. He led efforts to draft and pass the Student Loan Certainty Act of 2013, which averted drastic increases in student loan interest rates, saved students across the country more than $50 billion in interest payments, and set the program on a path to long-term financial stability. In 2018, Senator King successfully included a number of provisions in the SUPPORT for Patients and Communities Act, legislation focused on improving the federal government’s response to the opioid epidemic. The legislation, which passed overwhelmingly, included language backed by Senator King to make medication-assisted treatment more readily available and adjust federal restrictions to allow residential treatment facilities to increase treatment capacity. Earlier this year, in the face of the coronavirus pandemic, he introduced the Paycheck Protection Flexibility Act to improve the Paycheck Protection Program and provide additional flexibility for business owners who’ve received PPP loans; the legislation was signed into law in June.

A leading voice on the importance of improving America’s cybersecurity, Senator King was selected by Congressional leadership to co-chair the Cyberspace Solarium Commission, a bipartisan effort established by Congress to review the threats facing America in cyberspace and develop a forward looking plan on how to defend ourselves against cyber threats. The commission, which consisted of bipartisan members of Congress, top Executive Branch officials, and nonpartisan industry leaders, laid out more than 75 recommendations to improve the cybersecurity of U.S. critical infrastructure and prepare the nation for future challenges in an increasingly digital world.

Senator King is committed to working across the aisle in small, bipartisan working groups that bridge partisan divides to address the challenges that face the nation. He co-founded the Former Governors Caucus, which brings together the Senate’s former Governors to chart pragmatic approaches to solutions, as well as the Senate Arctic Caucus, which hones in on Maine and America’s growing interest in the Arctic. Senator King also tries to informally bridge the partisan divide in Washington by frequently bringing his colleagues on both sides of the aisle to his home for barbeque dinners, where political talk is banned and the focus is getting to know one another. The bonds that are formed through these relationships often lay the foundation for successful legislation.

Prior to taking office, Senator King served as the 72nd Governor of Maine. During his two terms in the Blaine House, he focused on economic development and job creation.  Then-Governor King also achieved significant reforms in education, mental health services, land conservation, environmental protection, and the delivery of state services. He was re-elected in 1998 by one of the largest margins in Maine’s history.

Senator King is married to Mary Herman and has four sons, Angus III, Duncan, James, and Ben, one daughter, Molly, and six grandchildren. He attended Dartmouth College and the University of Virginia Law School. In his free time, he enjoys exploring the Maine outdoors, either on his Harley or with his family in their camper.