Art at Watson presents Out of the Fray 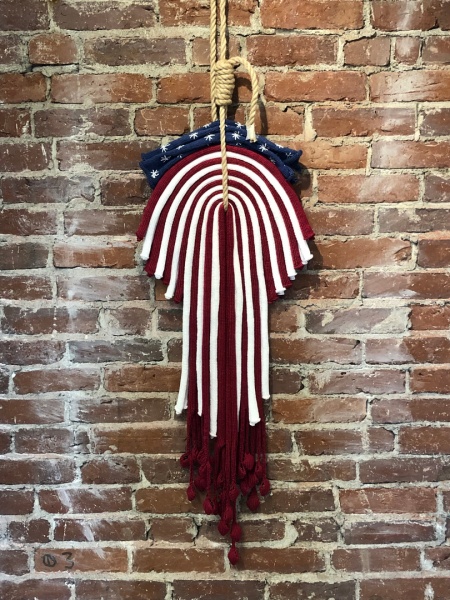 Out of the Fray was a special focused group exhibition curated by Judith Tolnick Champa featuring the American flag as a powerful symbol of critique.

Exclusively virtual, it focused on the complex meanings and creative absorption that the American flag has held for a dozen contemporary artists. Both emerging and established, they represented an aesthetically, racially, ethnically and geographically diverse practice.

In 2020, the flag came increasingly to serve as a fraught symbol of democracy and its freedoms. During the coronavirus pandemic, it became ubiquitous signage in our lives, across urban, suburban, and rural contexts, as well as in the increasing racial upheaval and alarming politicized events captured by all media nationwide.

Featuring work by three progenitors and a cohort of 12 contemporary artists, Out of the Fray was developed in a time of frayed nerves. It anticipated that we might begin to see ourselves clear of at least some of the prevailing assaults on democratic values that we have recognized and experienced, and be able and willing to re-examine and re-knit the positive, salvageable elements of a frayed union. This project was intentionally timed to open on the brink of the national election and continue through its immediate wake, a decisive turning point for a liberating change of course, what was imagined as a potential shift out of the fray.

The exhibition was based on selected single works by three progenitor artists, exemplars known for their representations of the flag in their work: the late photographer Robert Frank; painter, printmaker, and sculptor Jasper Johns; and painter, printmaker, narrative quiltmaker, mixed-media sculptor, and writer Faith Ringgold. In an intentional motivation to defamiliarize their work, their essential sources of inspiration were discoverable anew through their selected progeny—a dozen contemporary artists living and working in places as distant as Los Angeles, New York, St. Louis, and Burlington, Vermont. The artists' creative results in adopting the flag as an expressive motif and an activist rallying cry were represented and interpreted through a digital catalogue of the artists' reflective statements and the curator's remarks.

According to curator Judith Tolnick Champa, "No artist undertakes treatment of the flag lightly. Working with and through the image of the flag is an inevitable reckoning of an intensive sort that each artist seeks to realize in her or his own way." The contemporary cohort of artists practiced their chosen media with energetic expression—from drawing through photography and video, text work to textile. They worked with lead, bullet casings, synthetic human hair, cotton, found objects such as rescued vintage flags, and much more. Diverse in media and approach, they shared an uncompromising attitude in their varied interpretations of the flag as a powerful symbol of critique, its waving (or wavering) between states of being, and a more severe conceptual caroming. In never accepting the traditional patriotic status quo, these individual, activist artists offered insightful, politically-minded commentaries. Taken together, the works in this exhibition provided an absorbing visual narrative and perspective on our present moment.

The curator expresses her deepest thanks to the passionate artists, to their representatives, and to additional lenders of images. The exhibition was the fall offering of Art at Watson, an initiative of the Watson Institute for International and Public Affairs, Brown University. The curator is grateful to the Art at Watson Committee, especially co-chairs Steven B. Bloomfield and Jo-Anne Hart and members Sarah Baldwin and John Mazza.