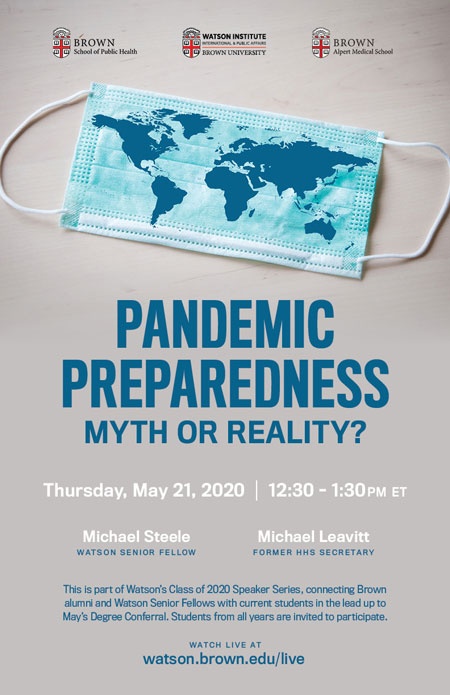 Join Watson Senior Fellow Michael Steele and Michael Leavitt, former HHS Secretary, to discuss one of the most compelling questions of the day. Could the U.S. have been more prepared to tackle the current crisis? Did President Trump ignore the work done by previous administrations? Can states begin to reopen economies safely? What does travel, work and life look like leading up to a vaccine?

Governor Leavitt served three terms as governor of Utah and served in the cabinet of President George W. Bush as Administrator of the Environmental Protection Agency and as Secretary of Health and Human Services. He is now chair of the Board of Managers at the Leavitt Partners consulting firm, based in Salt Lake City.

Michael Steele made history as the first African American elected to statewide office when he was elected Lt. Governor of Maryland in 2003; and again with his subsequent chairmanship of the Republican National Committee in 2009. He is a senior fellow at the Watson Institute, a frequent political commentator, and the host of the Michael Steele Podcast.

Co-sponsored by the School of Public Health and Alpert Medical School.

This is part of Watson's Class of 2020 Speaker Series, connecting Brown alumni and Watson Senior Fellows with current students in the lead up to May's Degree Conferral. Students from all years are invited to participate.