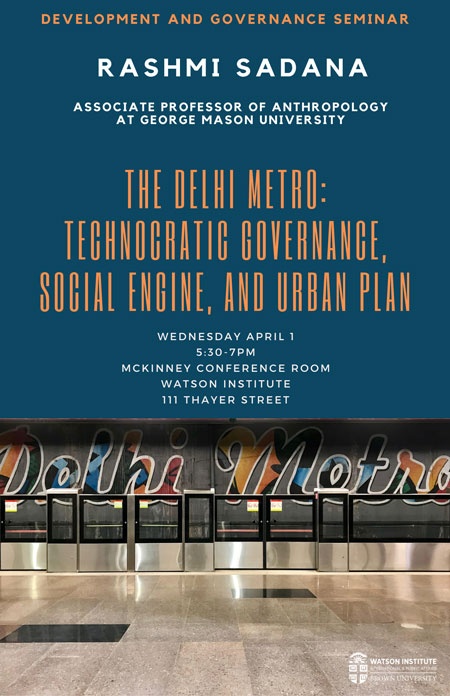 This talk showcases Delhi’s new metro rail system as not only transport infrastructure, but also as a mode of governance, a vehicle for social mobility, and a driver of the city’s urban plan. The Metro is both a method and an ethic, marking out a new way to urbanize and to be urban. The Metro is also a bulldozer and hegemon, heavy with its own success and unprecedented support from the city and central governments that built and now run the system in the form of the Delhi Metro Rail Corporation. As a form of transnational infrastructure, the Metro takes from other metro and subway systems around the world, in terms of construction and design, and also moves beyond them in the case of its particular impact on and interface with the ancient and modern megacity of Delhi.

Since the first line opened in December 2002, the Delhi Metro has become part of the lived experience of the nearly three million who have come to ride it each day. Today there are eight lines and over 270 stations, covering 373 kilometers of Delhi’s National Capital Region, and extending into the neighboring states of Uttar Pradesh and Haryana. At the peripheral edges of the city where the Metro meets more rural sensibilities, ideas of the urban get created and contested. Anthropologist Brian Larkin has detailed how infrastructure “offers insights into other domains such as practices of government, religion, or sociality.” Infrastructure, he writes, is both a “collective fantasy” and an “enchanted site of statecraft” that reveals a particular constitution of the political and addresses and constitutes a new set of publics. This talk details the Metro’s key domains and contestations in order to ask what is being developed in and through the Metro, in terms of how to plan, how to govern, and how to live.

Rashmi Sadana is an associate professor of anthropology at George Mason University. Professor Sadana’s field research focuses on changing forms of identity (class, caste, gender, religious, linguistic) in postcolonial, urban India. She is especially interested in how Indians express their modern and increasingly global selves, and the cultural and political ramifications of doing so. Her current research concerns the globalization of India’s cities with a focus on gendered citizenship, notions of the public and public spaces, and the politics of urban design and development as witnessed in the construction of Delhi’s new metro rail system. The project brings into relief the contradictions of a globalized middle-class modernity that privileges capital interests in urban planning – the “world-class” model – versus creating city services for the majority of low-income Delhi-ites. Her research probes the relationship between the Delhi Metro as infrastructural mega-project and the on-the-ground social and material impact of the system on people’s lives, aspirations, and senses of self.