Rev. Dr. William J. Barber II ─ We Can Not Accept This Anymore: The Price of Inequality 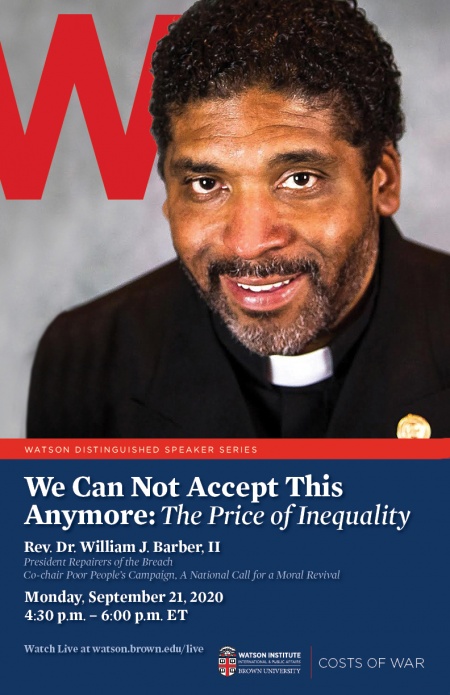 Rev. Dr. William J. Barber II, President, Repairers of the Breach and co-chair of the Poor People's Campaign talks with the Watson Institute's Catherine Lutz, Professor of International Studies, Professor of Anthropology and one of the project directors for the Costs of War Project

As protests, inequality, and anger continue to roil the United States, Rev. Barber will talk with Professor Lutz and the Brown community about building a broad-based grassroots social justice movement to confront systemic racism, poverty, environmental devastation, and the war economy in America today. He will discuss nonviolent civil disobedience, the problem of militarism and the misplaced priorities of federal spending on war, and the Poor People's Moral Budget.

William J. Barber, II is a pastor and social justice advocate building a broad-based grassroots movement, grounded in the moral tenets of faith-based communities and the constitution, to confront systemic racism, poverty, environmental devastation, the war economy and the distorted moral narrative of religious nationalism in America today.

Barber founded Repairers of the Breach, a leadership development organization, in 2014 to expand and build a national movement rooted in moral analysis, moral articulation, and moral action. In 2016 he led a moral revival tour that covered 26 states and attracted thousands. In 2017, he and colleagues launched a revival of the 1968 Poor People’s Campaign that was spearheaded by Rev. Dr. Martin Luther King, Jr., and many others.

William Barber received a B.A. (1985) from North Carolina Central University, an M.Div. (1989) from Duke University, and a D.Min. (2003) from Drew University. He has also received eight Honorary Doctorates. In 2019, he received the Hubert H. Humphrey Award for Civil and Human Rights. He is also a distinguished visiting professor at Union Theological Seminary.

Barber’s publications include the co-authored books Forward Together: A Moral Message for the Nation (2014), The Third Reconstruction: Moral Mondays, Fusion Politics, and the Rise of a New Justice Movement (2016), and Revive Us Again: Vision and Action in Moral Organizing (2018), and he is a contributing op-ed writer for The Guardian, The New York Times, CNN, MSNBC and the Washington Post. Barber is also a 2018 MacArthur Fellow, 2018 Tar Heel of the Year, and an Auburn Seminary Senior Fellow.