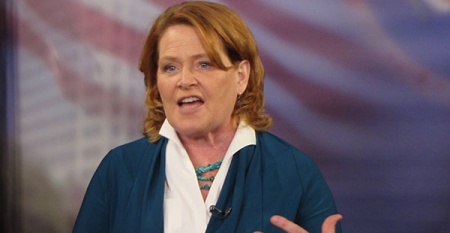 Registration required. Register here.In support of our community's continued health, if you are not feeling well for any reason, please consider staying home rather than attending the event. For up-to-date information, including campus travel restrictions, please visit the University’s COVID-19 Updates website.

This event is for students only.

During her six years in the U.S. Senate, Heitkamp quickly became a proven senator who worked across the aisle to fight for North Dakotans. She personally showed that if senators work together, it can lead to real solutions.

Throughout her time in public service, Heitkamp has stood up for Native American children; fought for working families; worked to stop human trafficking; pushed for affordable health care; helped address the detrimental impact exposure to trauma can have on children; helped craft and pass meaningful bank reform and fought for a true all-of-the-above energy strategy.

Heitkamp previously served as North Dakota’s Attorney General, and prior to that as the state’s Tax Commissioner. She serves on numerous boards including the McCain Institute and the Howard Buffett Foundation. She is the founder and Chair of the One Country Project, an organization focused on addressing the needs and concerns of rural America. She is a Senior Fellow in International and Public Affairs at Brown University and also serves as a contributor to CNBC and ABC News.