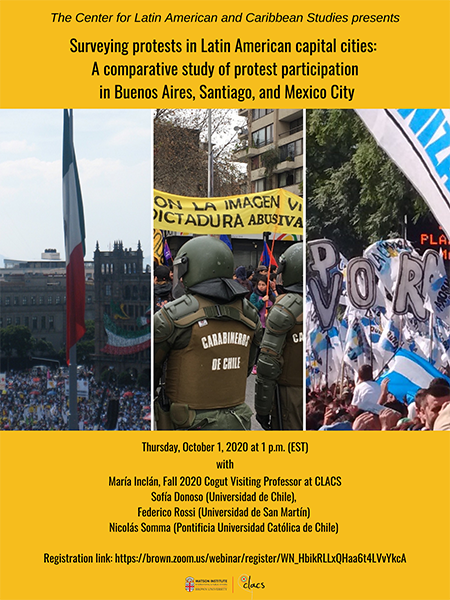 An in-depth discussion with academics from across Latin American surveying and analyzing protesting in the region's main cities.

María Inclán, Profesora-Investigadora at the Centro de Investigación y Docencia Económicas in Mexico City. She has specialized on the study of comparative social movements and democratization processes. In particular, her research has focused on the development of social movements and cycles of protest within democratic transitions and individual triggers of protest participation. She is currently developing a research project on online political and mobilizing campaigns. Before coming to CLACS, she spent a year as a Visiting Fellow and Visiting Associate Professor of History at Princeton University’s Program in Latin American Studies (2017-2018). Her first book, The Zapatista Movement and Mexico’s Democratic Transition was published in 2018 by Oxford University Press. Other works have been published in the American Journal of Sociology, Journal of Conflict Resolution, Journal of Peace Research, Latin American Politics and Society, and Mobilization.

Sofia Donoso, Academic of the Department of Sociology of the University of Chile. A sociologist from the University of Chile, Master of Philosophy in Development Studies and Ph.D. in Development Studies from the University of Oxford, England. In the years 2014-2016, she did a post-doctorate at the Center for Conflict and Social Cohesion Studies (COES), where she is currently an adjunct researcher. She directs the Fondecyt Initiation project No. 11180890, entitled Parties-movement in action: The case of the Broad Front in Chile, and is co-researcher of the Fondecyt Regular projects No. 1160308, Dynamics of participation in the protest: A comparison between Argentina and Chile, and Conicyt Redes Nº 18 / PCI / 111. She is co-editor of Social movements in Chile: Organization, trajectories, and political consequences (Palgrave MacMillan, 2017). Her lines of research focus on social movements, participation in a protest in a comparative perspective, and the institutionalization of protest.