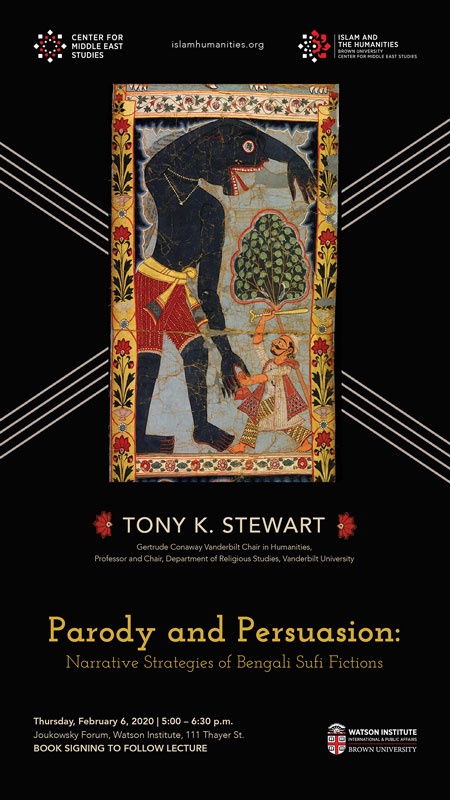 Over the last five centuries and peaking in the nineteenth century, large numbers of Bengali fictional tales purported to be Muslim, specifically Sufi, in their inspiration and orientation. Because of their amusingly spectacular plots and the fact that they delivered frank perspectives on contemporary society in simple and even crude language, they have since slipped into the gaping maw of intellectual irrelevance. Today it seems strange that these fictional fabulations have been lumped together with a genre of overtly religious, mainly Sunni, moralizing instructional manuals called Nasihat Namas. The joining seems to be the result of their production, because both of these seemingly disparate genres were printed in chapbook form, on cheap paper, by all the same presses, and cost little.

Using theorist Wolfgang Iser's work on the reality of fiction as a springboard, Tony Stewart argues that the conjunction is not accidental, that one is the flipside of the other, complementary elements of a single genre. The one was hortatory, overtly sermonizing on ethical and religious issues, while the other used entertaining narratives to prepare audiences to be receptive to those religious lessons. Those zany fictions did not just entertain; they laid subtle foundations to reconfigure the traditional order of Bengali Hindu culture so that Islamic perspectives seemed perfectly natural and foundational, a move that demonstrates a different mode of conversion than normally imagined.

Tony K. Stewart is the Gertrude Conaway Vanderbilt Chair in Humanities at Vanderbilt University. A specialist in the religions and literatures of early modern Bengal, his works include Witness to Marvels: Sufism and Literary Imagination (California 2019) and The Final Word: The Caitanya Caritamrta and the Grammar of Religious Tradition (Oxford 2010). He has translated stories of Sufi saints in Fabulous Females and Peerless Pirs: Tales of Mad Adventure in Old Bengal (Oxford 2004) and a hagiography of god-man Krsna Caitanya with Edward C. Dimock, Jr., The Caitanya Caritamrta of Krsnadasa Kaviraja (Harvard Oriental Series 56, 1999). He is currently preparing an anthology of translations tentatively titled “Needle at the Bottom of the Sea: Five Miracle Tales of Bengali Sufi Saints.”