The Uncondemned: Film Screening and Discussion 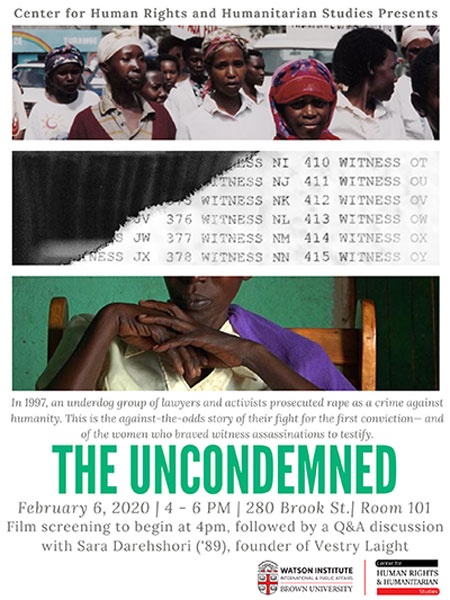 The Uncondemned tells the gripping and world-changing story of a group of young international lawyers and activists who fought to make rape a crime of war, and the Rwandan women who came forward to testify and win justice where there had been none. Up until this point, rape had not been prosecuted as a war crime and was committed with impunity. A courtroom thriller and personal human drama, The Uncondemned beautifully interweaves the stories of the characters in this odyssey, leading to the trial at an international criminal court--and the results that changed the world of criminal justice forever.

Following the screening there will be a Q&A with one of the film protagonists, Sara Darehshori '89.

Sara Darehshori is a principal at Vestry Laight. Prior to founding Vestry Laight, Darehshori was senior counsel in the US program at Human Right Watch where she researched and advocated on issues relating to the handling of sexual assault cases in the United States. Her work in Washington, DC, where she documented DC police’s failure to properly investigate scores of sexual assault cases, led to the Sexual Assault Victims Rights Amendment Act of 2014, landmark legislation improving police response to sexual assault in the District of Columbia. Darehshori also authored two reports on retaliation against those who report sexual assault in the US military, resulting in legislation and policy changes that increased protections for service members who have experienced sexual assault. She also authored a report on immigrant victims of crime in the US.

Prior to joining the US program, Darehshori was senior counsel in Human Rights Watch's International Justice program, where she worked on international justice issues relating to Darfur, Serbia, and the International Criminal Court. During her time at Human Rights Watch, Darehshori published numerous reports, news releases, op-eds and policy papers. She has made several appearances in media including USAToday, the New York Times, the Washington Post, the LA Times, the Guardian, NBC, and Time Magazine.

Before joining Human Rights Watch, Darehshori worked as a prosecutor at the International Criminal Tribunal for Rwanda where she prosecuted the first case establishing rape as a war crime in an international court, the Prosecutor v Akayesu. Her work was featured in the award-winning documentary The Uncondemned. Darehshori previously worked as a litigator in New York at Cravath, Swaine & Moore for five years. She is a graduate of Brown University and Columbia Law School. In 2016 she was appointed by President Obama as a Member of the US Holocaust Memorial Council where she served on its Committee on Conscience.