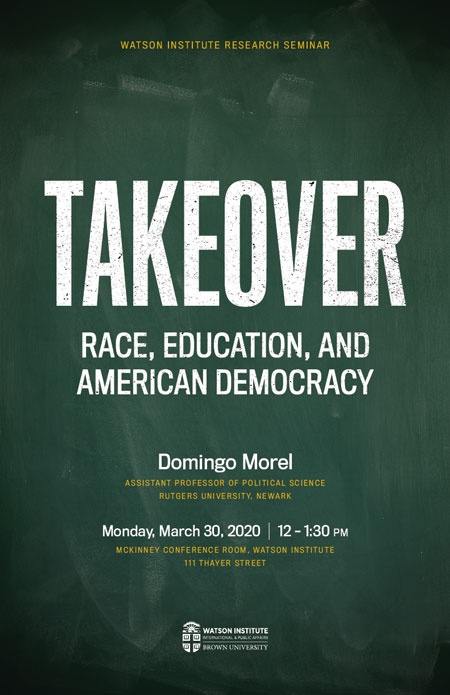 This seminar will be rescheduled in Fall 2020.

Domingo Morel is an assistant professor of political science at Rutgers University, Newark. He is also an affiliate member of Global Urban Studies and the Center on Law, Inequality, and Metropolitan Equity at Rutgers Newark.

Dr. Morel’s current research examines how the increasing presence of state governments in urban affairs after the 1960s has affected Black and Latino political empowerment in U.S. cities. His book, Takeover: Race, Education, and American Democracy (Oxford University Press) examines the political implications of state takeovers of local school districts for communities of color. His other book, Latino Mayors: Power and Political Change in the Postindustrial City (co-edited with Marion Orr, Temple University Press), examines the rise of Latino mayors in the U.S.

In addition to his scholarship, Dr. Morel has years of applied experience in political affairs and public policy. He is co-founder of the Latino Policy Institute at Roger Williams University and past president of the Rhode Island Latino Political Action Committee.

He received his PhD in political science from Brown University in 2014.