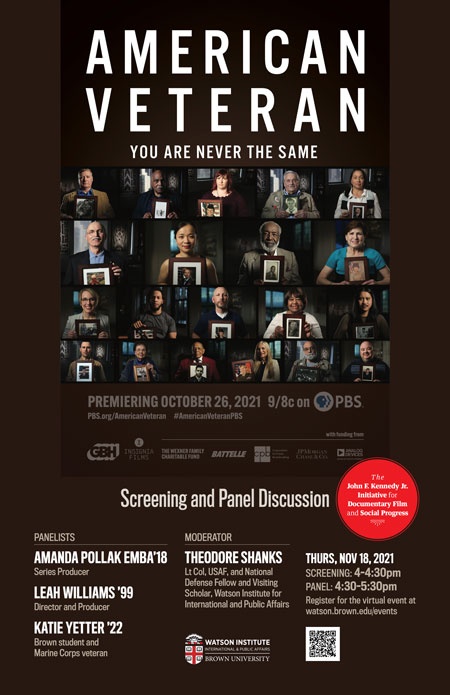 Join us for a special screening and discussion with the director and producers of American Veteran, a new 4-part series on PBS. Director and producer Leah Williams '99 and series producer Amanda Pollak EMBA'18 will present a half-hour clip reel from the series, followed by a discussion with Williams, Pollak, and Katie Yetter '22, a Brown student and Marine Corps veteran, and moderated by TJ “Doc” Shanks, Lt Col, USAF, National Defense Fellow and Visiting Scholar at the Watson Institute.

Today, America has nearly 18 million living military veterans, from the “Greatest Generation” to men and women coming home from recent tours in Afghanistan and Iraq. They join the now-silent ranks of American veterans reaching back to our earliest conflict, the Revolutionary War.

American Veteran illuminates the veteran experience with a stunning range of voices from today and across the arc of American history.

The military is part of America’s founding story – a project to which, as George Washington put it, every citizen owed “his personal services.” In war and in peace, what veterans have done in America’s name, and how they have been treated when they return, is woven into the fabric of the American story and has had a profound impact on our nation.

For those who have served, from the beginning of the republic to the present, military service has been a transformative experience. What is that experience, and how does it change the men and women who have joined the ranks? And throughout the nation’s history, how have vets been perceived? Sometimes honored, sometimes reviled, ignored, or forgotten, veterans may re-enter civilian life to encounter a population that often has little or no knowledge of their experience.

American Veteran, created by GBH, will trace the veteran experience through a four-part broadcast series, a nine-part podcast, and a ten-part series of digital shorts. From the citizen-soldiers returning from the Revolution to today’s warrior class, it is a deeply moving story, highlighting personal remembrances, drawing civilian viewers into an unfamiliar culture, and showcasing the evolving relationships between Americans who have served in the military and those who have not.

Every voice featured in American Veteran, from narrators to interviews to scholars, is a veteran’s. Every story these veterans relate contributes to our exploration of the shifting relationships, over time and today, between Americans who have served in the military and those who have not.