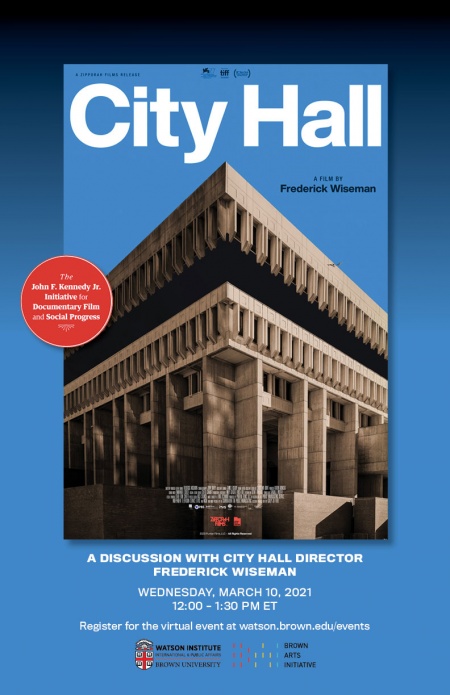 Join us for a discussion with Frederick Wiseman, director of CITY HALL. Moderated by Edward Steinfeld, director of the Watson Institute

City government touches almost every aspect of our lives. Most of us are unaware of or take for granted these necessary services such as police, fire, sanitation, veterans affairs, elder support, parks, licensing of various professional activities, recordkeeping of birth, marriage and death as well as hundreds of other activities that support a city’s residents, businesses and visitors. CITY HALL, by Frederick Wiseman, shows the efforts by Boston city government to provide these services. The film also illustrates the variety of ways the city administration enters into civil discourse with the citizens of Boston. Mayor Martin J. Walsh and his administration are presented addressing a number of their policy priorities which include racial justice, affordable housing, climate action, and homelessness. CITY HALL shows a city government successfully offering a wide variety of services to a diverse population.

To watch the film CITY HALL in advance, register here.  We will send out information on accessing the film.  Space is limited.

Mr. Wiseman is a film and theater director of 45 films, primarily focusing on American institutions. In 2019, he was the honoree of the Library Lions Award from the New York Public Library and received the Pennebaker Award for Lifetime Achievement at the Critics’ Choice Documentary Awards. In 2018, he was the Charles Eliot Norton Professor of Poetry at Harvard University. In 2016, he received an Honorary Award for lifetime achievement from the Academy of Motion Picture Arts and Sciences Board of Directors. He is a MacArthur Fellow, a Fellow of the American Academy of Arts and Sciences, the recipient of a Guggenheim Fellowship, and an Honorary Member of the American Academy of Arts and Letters. He has won numerous awards, including four Emmys. In recent years, he directed The Belle of Amherst, Beckett’s Happy Days in Paris and Vasily Grossman’s The Last Letter at the Comédie-Française in Paris and Theatre for a New Audience in New York. A ballet inspired by his first film, TITICUT FOLLIES (1967), premiered at the New York University Skirball Theater in 2017.