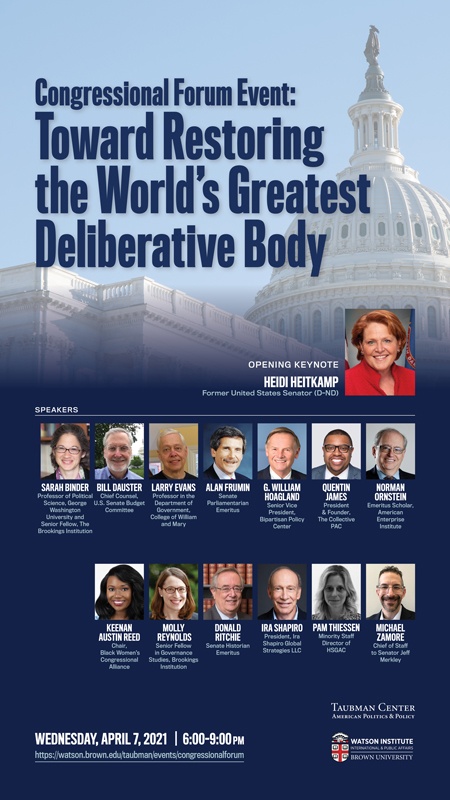 Senators are fond of calling the U.S. Senate “the world’s greatest deliberative body. Few observers would disagree that the Senate no longer earns such praise. In recent Congresses, the Senate has been plagued by gridlock growing out of extreme partisanship and political polarization.

The Taubman Center for American Politics and Policy and the Watson Institute for International and Public affairs at Brown University will host a three-hour program entitled “Toward restoring the World’s Greatest Deliberative Body” to examine the gridlock and the rules, precedents, procedures, traditions, mores, history, traditions and behavior that have accelerated the downward spiral of this once revered body which James Madison described as “a necessary fence” which would protect “the people against their rulers.”

Taubman Interim Director, Professor Richard Arenberg (who worked in senior staff positions in the Senate for 34 years) will be joined by a bipartisan, and in some cases, nonpartisan panel of experts with many years of experience closely observing and/or working in the Senate.

The panel will explore the roots of the apparent inability of recent Senates to legislate solutions to the nation’s greatest problems and discuss some of the potential reforms and other actions which could help move the body in the future back toward its historic role.