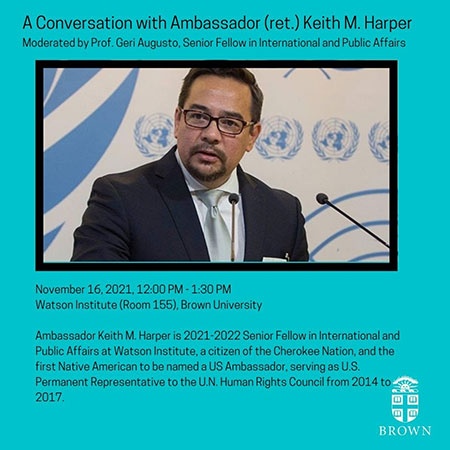 From 2010 to 2014, Ambassador Harper served as Commissioner on the President’s Commission on White House Fellowships. He also served as a chair for Native American policy in the 2008 Obama for America presidential campaign and then as a member of the Obama-Biden Presidential Transition Team in the Energy and Environment Cluster. Ambassador Harper was previously Senior Staff Attorney and head of the Washington, DC office of the Native American Rights Fund (NARF) from 1995 to 2006. During his tenure at NARF, he also taught Federal Indian Law as an adjunct professor at Catholic University, Columbus School of Law and at American University Washington College of Law. Ambassador Harper served as a Supreme Court Justice on the Supreme Court of the Poarch Band of Creek Indians from 2007 to 2008 and as an Appellate Justice on the Mashantucket Pequot Tribal Court from 2001 to 2007.

While attending New York University School of Law, Ambassador Harper served as Articles and Notes Editor of the Journal of International Law and Politics, was a Root-Tilden-Snow Scholar and a Fellow at Center for International Studies. After graduation, he was law clerk to the Honorable Lawrence W. Pierce on the US Court of Appeals for the Second Circuit.

Ambassador Harper serves on numerous boards of non-profit organizations including the following: American Constitution Society; Defenders of Wildlife; United Nations Association – National Capitol Area and the Artistic Freedom Initiative. For the past two years, the American Bar Association President has appointed Ambassador Harper as a Special Advisor to the ABA’s Rule of Law Initiative.