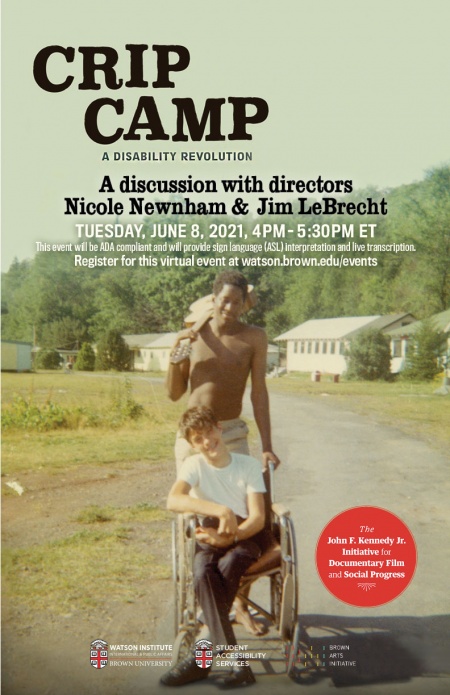 This event will be ADA compliant and will provide sign language (ASL) interpretation and live transcription.

Join us for a discussion with Nicole Newnham and Jim LeBrecht, directors of Crip Camp.

Moderated by Edward Steinfeld, director of the Watson Institute

In the early 1970s, teenagers with disabilities faced a future shaped by isolation, discrimination and institutionalization. Camp Jened, a ramshackle camp “for the handicapped” (a term no longer used) in the Catskills, exploded those confines. Jened was their freewheeling Utopia, a place with summertime sports, smoking and make-out sessions awaiting everyone, and campers experienced liberation and full inclusion as human beings. Their bonds endured as many migrated West to Berkeley, California — a hotbed of progressive activism where friends from Camp Jened realized that disruption, civil disobedience, and political participation could change the future for millions.

Co-directed by Emmy®-winning filmmaker Nicole Newnham and film mixer and former camper Jim LeBrecht, this joyous and exuberant documentary arrives the same year as the 30th anniversary of the Americans with Disabilities Act, at a time when the country’s largest minority group still battles daily for equality and the freedom to exist. Crip Camp is executive produced by President Barack Obama and Michelle Obama; Tonia Davis and Priya Swaminathan; Oscar® nominee Howard Gertler (How to Survive a Plague) and Raymond Lifchez, Jonathan Logan and Patty Quillin; LeBrecht, Newnham and Sara Bolder produce.

The film is available via Netflix.  If you do not already have an account, you can sign up for a free, 30 day trial.

Nicole Newnham (Writer, Director and Producer) is an Emmy-winning documentary producer and director, four-time Sundance Film Festival alumnus and five-time Emmy-nominee. She has recently produced two virtual reality films with the Australian artist / director Lynette Wallworth: the breakthrough VR work Collisions, which won the 2017 Emmy for Outstanding New Approaches to Documentary, and Awavena, featured at the World Economic Forum in Davos and at the 2017 Sundance Film Festival. Nicole co-directed The Revolutionary Optimists, winner of the Sundance Hilton Sustainability Award. She also co-directed and co-produced the acclaimed documentary The Rape of Europa, about the Nazi war on European culture, for which she was nominated for a WGA award and shortlisted for an Academy Award. With Pulitzer-prize winning photographer Brian Lanker, she produced They Drew Fire, about the Combat Artists of WWII, and co-wrote the companion book, distributed by Harper Collins. A 1997 graduate of the Stanford Documentary Film Program, Nicole lives in Oakland with her husband Tom, and two sons, Finn and Blaine.

Jim LeBrecht (Writer, Director and Producer) has over 40 years of experience as a film and theater sound designer and mixer, author, disability rights activist and filmmaker. Jim started his career in the theater, working as the resident sound designer at the Berkeley Repertory Theatre for 10 years. In 1989 he found a new home at the Saul Zaentz Film Center where he started out as an apprentice and worked his way up the ladder to become a sound designer, mixer and sound supervisor.

A movie poster showing a vintage color snapshot. A young adult is being pushed in his wheelchair by a counselor who has a guitar slung over his shoulder. In the background are the low slung bunks and buildings of Camp Jened, a summer camp for disabled youth. Text on the poster reads: From executive producers President Barack Obama and Michelle Obama. A Netflix original documentary. CRIP CAMP: a disability revolution. An award laurel reads: Winner Audience Award U. S. Documentary Sundance film festival 2020. In select theaters and on Netflix March 25.