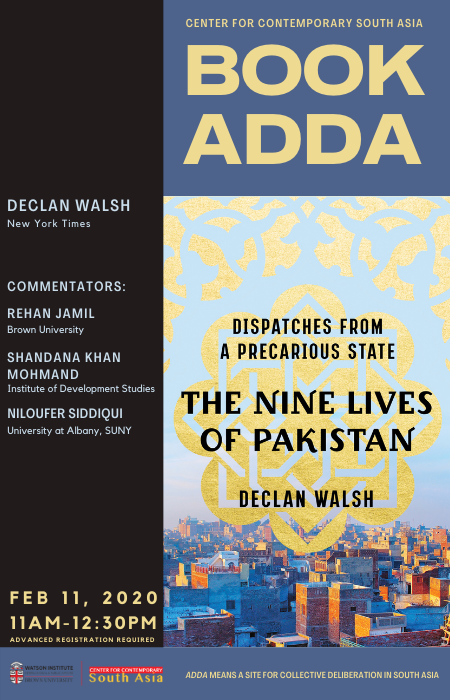 Declan Walsh is one of the New York Times’s most distinguished international correspondents. He started his career at The Sunday Business Post in Dublin before moving to Nairobi, Kenya in 1999 to report on sub-Saharan Africa as a freelance reporter. In 2004 he moved to Islamabad, Pakistan, covering Pakistan and Afghanistan for The Guardian. He joined The New York Times in 2011 as Pakistan bureau chief. The Pakistani authorities expelled him from the country in May 2013 for unspecified reasons. He is currently the Cairo bureau chief, covering Egypt and the Middle East,

This book adda will discuss, Walsh's portrait of Pakistan over a tumultuous decade captures the sweep of this strange, wondrous, and benighted country through the dramatic lives of nine fascinating individuals.

On assignment as the country careened between crises, Walsh traveled from the raucous port of Karachi to the salons of Lahore, and from Baluchistan to the mountains of Waziristan. He met a diverse cast of extraordinary Pakistanis—a chieftain readying for war at his desert fort, a retired spy skulking through the borderlands, and a crusading lawyer risking death for her beliefs, among others. Through these “nine lives” he describes a country on the brink—a place of creeping extremism and political chaos, but also personal bravery and dogged idealism that defy easy stereotypes.

Unbeknownst to Walsh, however, an intelligence agent was tracking him. Written in the aftermath of Walsh’s abrupt deportation, The Nine Lives of Pakistan concludes with an astonishing encounter with that agent, and his revelations about Pakistan’s powerful security state. Intimate and complex, attuned to the centrifugal forces of history, identity, and faith, The Nine Lives of Pakistan offers an unflinching account of life in a precarious, vital country.