Disappearances in Transitional Latin America: The Case of Mexico 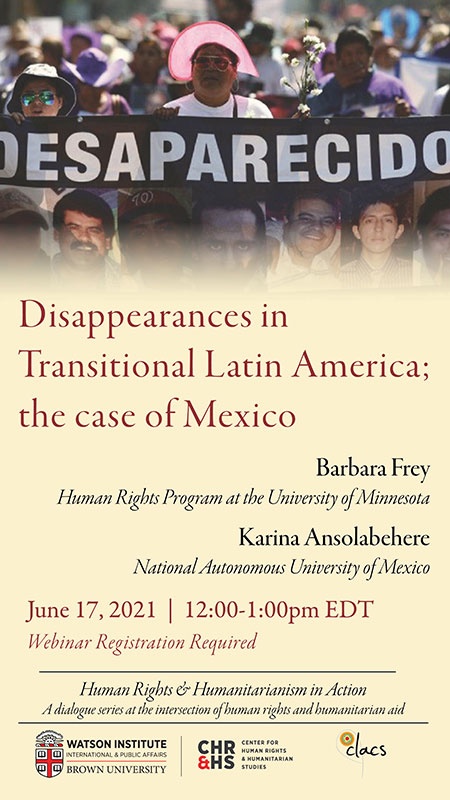 Simultaneous interpreting in Spanish will be available on the Zoom webinar.

This panel discussion featuring Dr. Barbara Frey of the Human Rights Program at the University of Minnesota and Dr. Karina Ansolabehere of the National Autonomous University of Mexico will discuss an ongoing research-practice collaborative to systematically investigate, analyze, and combat patterns of impunity regarding enforced disappearances in Mexico. By applying academic methods to examine available sources of information, the aim of their work is to decrease disappearances and impunity by increasing knowledge and public visibility about the patterns of disappearances. Through the development of objective and systematic databases of the disappeared, the study provides a look into Mexican press reporting about named disappeared persons: who they are, where they disappeared, who carried out the crime, and the outcomes of each case.

Dr. Karina Ansolabehere is a Researcher at the Institute of Legal Research of UNAM and part-time researcher at FLACSO-Mexico. Her areas of interest are: judicial politics, human rights, legal mobilization, sociology of law, and political theory. She has a degree in Sociology from the University of Buenos Aires, is Master in Economic Sociology from the Institute of Higher Social Studies of the National University of General San Martín, and PhD in Social Sciences Research with a Specialization in Political Science from the Latin American Faculty of Social Sciences – Campus Mexico. She is a member of the National System of Researchers with Level III.

Dr Ansolabehere is currently principal investigator of the Observatory on Disappearances and Impunity in Mexico. She has multiple publications, the most recent is Handbook of Law and Society in Latin America co-edited with Rachel Sieder and Tatiana Alfonso (Routledge, 2019).

Barbara A. Frey, J.D., is Senior Lecturer in the Institute for Global Studies and directs the Human Rights Program at the University of Minnesota. Frey is a Principal Investigator with the Observatory on Disappearances and Impunity in Mexico. Frey co-edited the forthcoming volume, Disappearances in the Post-Transition Era in Latin America (Oxford U Press), with Karina Ansolabehere and Leigh A. Payne; and the 2018 volume, Mexico’s Human Rights Crisis (Penn Press), with Alejandro Anaya-Muñoz. She received two Fulbright-Garcia Robles fellowships (2013 and 2019) for research in Mexico. Frey was an alternate member of the U.N. Sub-Commission on the Promotion and Protection of Human Rights (2000-03) and was Special Rapporteur for a Sub-Commission study on firearms and human rights. Frey directed Minnesota Advocates for Human Rights from 1985-97.