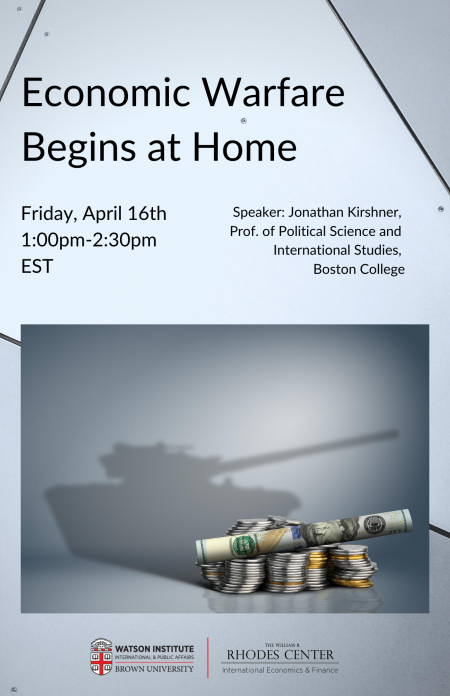 Jonathan Kirshner joins the Rhodes Center as the keynote speaker for the "Economic Warfare: What Can World War One Tell us about 21st Century Conflicts?" conference to discuss how economic warfare begins at home. Assessments of the prospects for economic diplomacy typically focus on apparent material capabilities (the levers a state would draw upon), and their potential coercive power (the economic effects of measures introduced and their prospect for bringing about desired international political outcomes). Less attention has been paid to a crucial permissive factor: the robustness of the domestic social economy of a state contemplating the practice of economic warfare. But domestic disaffection is the leaky bucket that can prevent underlying power from being effectively mobilized for political purpose. The experience of Inter-war France well illustrates this. By the late 1920s France had Europe’s most powerful army, much of the world’s gold, and was an active and aggressive practitioner of economic warfare. Within a decade, however, tragically, and even shamefully, France could barely be roused to rise to its own self-defense. The stark difference between 1930 and 1940 is attributable to a radical polarization of French politics and an embrace of “the age of unreason” that paralyzed the country’s foreign policy practice. In the twenty-first century, a similar domestic desiccation is observable in the United States. Any assessment of what type of economic warfare America might contemplate, and the prospects that such measures, especially if costly, could be introduced skillfully and sustained consequentially, must address this likely rate-limiting factor.

Jonathan Kirshner is a Professor of Political Science and International Studies at Boston College, and the Stephen and Barbara Friedman Professor of International Political Economy Emeritus in the Department of Government, Cornell University. His research and teaching interests focus on International Relations (IR), Political Economy (especially macroeconomics and money), and Politics and Film. His work on the international politics of money and finance emphasizes the role of power politics and has also been greatly influenced by the writings of Keynes and economic historians such as Charles Kindleberger.