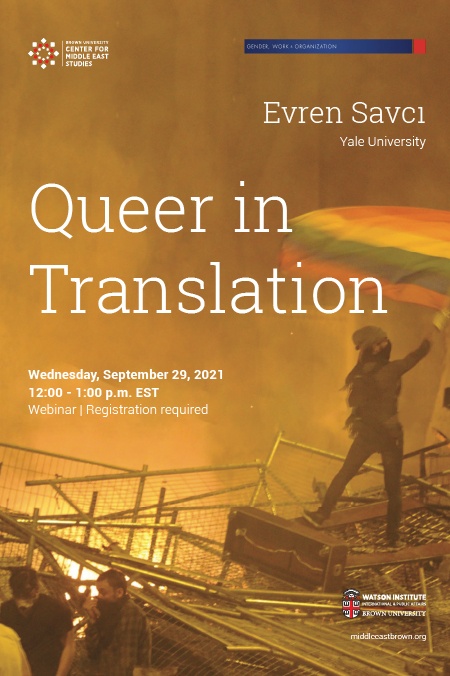 In Queer in Translation, Evren Savcı analyzes the travel and translation of Western LGBT political terminology to Turkey in order to illuminate how sexual politics have unfolded under Recep Tayyip Erdoğan's AKP government. Under the AKP's neoliberal Islamic regime, Savcı shows, there has been a stark shift from a politics of multicultural inclusion to one of securitized authoritarianism. Drawing from ethnographic work with queer activist groups to understand how discourses of sexuality travel and are taken up in political discourse, Savcı traces the intersection of queerness, Islam, and neoliberal governance within new and complex regimes of morality. Savcı turns to translation as a queer methodology to think Islam and neoliberalism together, and to evade the limiting binaries of traditional/modern, authentic/colonial, global/local, and East/West—thereby opening up ways of understanding the social movements and political discourse that coalesce around sexual liberation in ways that do justice to the complexities both of what circulates under the signifier Islam and of sexual political movements in Muslim-majority countries.

Co-hosted by Brown's Center for Middle East Studies and the Journal of Work, Gender, and Organization.

Evren Savcı is an assistant professor of the Women’s, Gender and Sexuality Studies Program at Yale University. Her first book, Queer in Translation: Sexual Politics under Neoliberal Islam (Duke University Press, 2021), analyzes sexual politics under contemporary Turkey’s AKP regime, with an eye to the travel and translation of sexual political vocabulary. Her second book project, tentatively entitled "Failures" of Modernization: Polygamy, Islamic Matrimony and Cousin Marriages in the Turkish Republic, turns to sexual practices that were deemed "uncivilized" and either heavily discouraged or outlawed by the Turkish Republic. Savcı’s work on the intersections of language, knowledge, sexual politics, neoliberalism, and religion has appeared in the Journal of Marriage and the Family, Ethnography, Sexualities, Political Power and Social Theory, Theory & Event, Journal of Feminist Studies in Religion, GLQ: A Journal of Lesbian and Gay Studies, and in several edited collections.