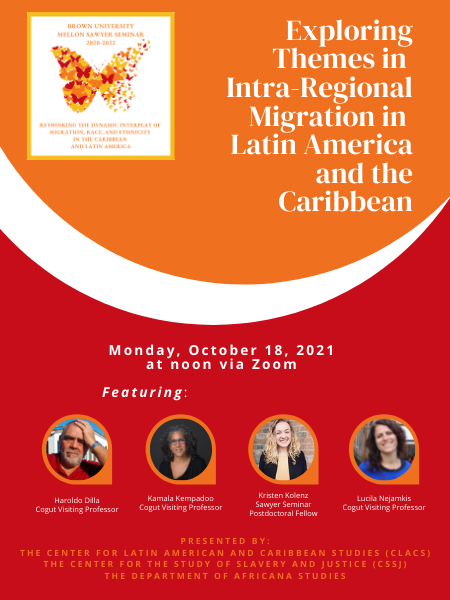 Join us for a discussion about intra-regional migration with the CLACS 2021-2022 Visiting Faculty. The content will be available in Spanish and English.

Kamala Kempadoo, of Guyana/Barbados, is a sociologist and Professor in the Department of Social Sciences at York University, Canada. She teaches Caribbean Studies, Black Radical and Black Feminist Thought, Sex Work Studies, and Critical Antitrafficking Studies and has published extensively on the Caribbean sex trade and global anti-trafficking discourses. She is currently working on a new book on racism, coloniality and anti-trafficking with Brown professor, Dr. Elena Shih. She was the Cogut Visiting Professor at CLACS for spring 2021 and will again be visiting in the spring 2022 semester.

Kristen A. Kolenz earned her MA and PhD in women’s, gender, and sexuality studies at The Ohio State University and her BA in philosophy at John Carroll University in Cleveland, Ohio. Her research focuses on resistance to state violence, Central American social movements, migration, and the transformative potential of everyday practices through the lens of decolonial and transnational feminisms. She is currently working on her book manuscript, an analysis of the transnational movements and community-building practices of Central Americans subjected to forced migration, dangerous crossing conditions, and confinement. In the study, Dr. Kolenz takes an interdisciplinary methodological approach that combines ethnographic methods, her own activist practice, and dance studies. The project bridges the fields of Latin American and Latinx Studies, bringing together research conducted in Guatemala, the Sonoran Desert, and immigrant justice movements in the US. The project’s goal is to document the transformative possibilities that emerge from Central Americans’ everyday practices of coping with loss, distance, and violence and to theorize transnational belonging in resistance to white supremacy.

Lucila Nejamkis, PhD in Social Sciences at Universidad de Buenos Aires. Her PhD thesis analysed inmigration policies in Argentina and Mercosur. She also holds a M.A. in Political Action and Citizen Participation (Universidad Rey Juan Carlos y Colegio de Abogados de Madrid, Madrid-Spain). BA in Sociology (U.B.A). Ex-PhD fellow of Conicet, and Ex-MA fellow of Community of Madrid. Current Researcher of the Technological and Scientific Research National Council (CONICET). Associate Researcher at IDAES (National University of San Martin, UNSAM) where she co-directs a migration studies center. She is also an Associate Professor at Arturo Jauretche National University. She has published numerous academic papers and chapters in books and has participated in several migration research projects dealing with a variety of subjects such as public policies, state, nationality, citizenship, and human rights in Argentina and MERCOSUR. Since 2019, co-director of the action-research “Socio-environmental strategies of women migrant workers in the Reconquista River Basin”, Buenos Aires Argentina) financed by the International Development Research Council (IDRC), Canada.