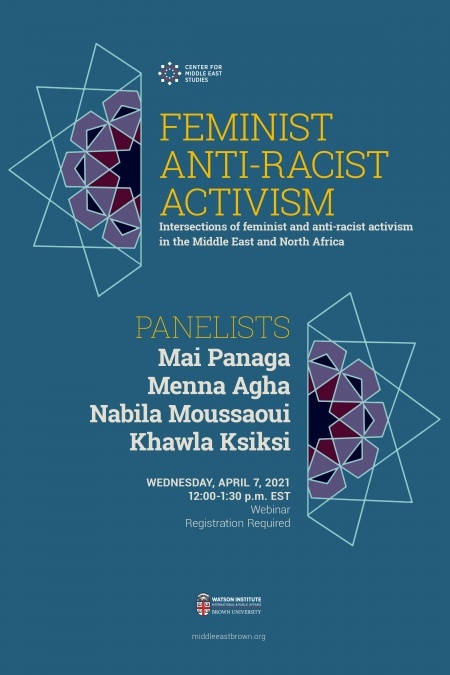 This webinar will explore the intersections of feminist and anti-racist activism in the Middle East and North Africa. Professor Nadje Al-Ali will be in conversation with Maie Panaga, Menna Agha, Nabila Moussaoui, and Khawla Ksiki - four prominent feminist activists and researchers who are engaged in anti-racist campaigns and politics. We will be exploring the question of racism within the Middle East and North Africa and the way feminist movements in the region have historically often been complicit in maintaining and reproducing racism. What if anything has changed recently? How do younger generations of feminist and queer activists approach racism? How has feminism changed in the region? Has the global Black Lives Matter movement had an impact on anti-racist struggles in the Middle East and North Africa?

Mai Panaga Babker is a Sudanese woman based in Cairo. Mai co-runs the editorial section at the Cairo-based Ikhtyar Feminist Collective. In 2014, Mai co-established Ikhtyar, which is devoted to feminist knowledge production in Arabic, covering areas of feminism, sexuality, reproductive health and rights, feminist Internet, and women’s street performances.

Menna Agha is an architect and researcher, a 2019/2020 spatial justice fellow, and was visiting assistant professor at the University of Oregon. Currently, she is coordinating a spatial justice agenda at the Flemish Architecture Institute. Menna holds a PhD from the University of Antwerp, and an MA from Köln international School of Design. Menna Agha is third-generation displaced Egyptian Nubian which informs her research interests in race, gender, space, and territory. Among her publications: “Nubia still exists: the Utility of the Nostalgic Space”, “The non-work of the unimportant: The shadow economy of Nubian women in displacement villages”

Nabila Moussaoui holds a PhD in Anthropology and works on migration issues South of the Mediterranean. Her thesis is entitled: "Underground Activities at the Algerian-Moroccan Borders." In this thesis, she reports on the reality of illegal migration known as harga which affects the Algerian and Moroccan youth, as well as the border trade (known as trabendo) that exists between the two countries and which extends to Southern Europe. Dr Moussaoui has a second thesis in progress at the University of Jean Jaurès in Toulouse, France, in which she investigates competency in migration. She is currently a lecturer, authorized to direct research, at the University of Oran 2 in Algeria.

Khawla Ksiksi is a Tunisian jurist, advocate for environmental justice and activist who is engaged in feminist, anti-racist, intersectional activism. After the Tunisian Revolution (2011), she joined Mnemty (My Dream), an association that fights against all forms of discrimination, especially racial, and promotes unity, peace, and justice. She is a human rights activist and member of a radical feminist movement called Falgatna (We’re Fed Up), which defends women’s rights and lobbies against sexual violence in Tunisia. In January 2020 she co-founded the collective “Voices of Black Tunisian Women” which offers them a safe space for self-expression. It is the first initiative that addresses issues affecting Black women, gives voice to their experiences and promotes research about their social conditions.