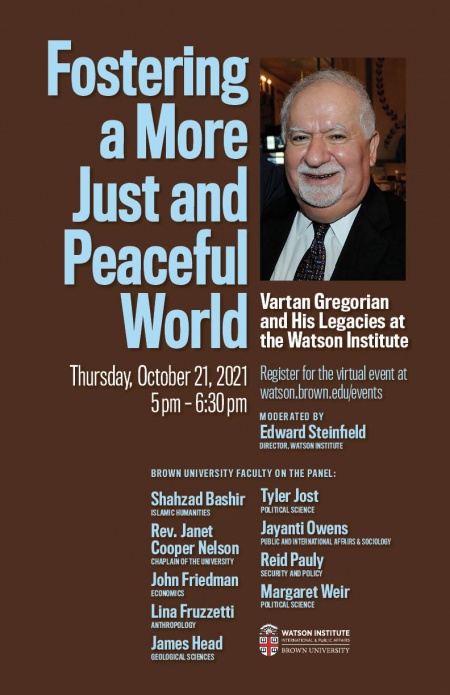 The Watson Institute was founded in 1991 during the Brown Presidency of Vartan Gregorian. Though the new organization had many founding mothers and fathers, Watson from the very start embodied values that to this day we associate directly with Vartan Gregorian: an unwavering commitment to globalism and multiculturalism, a passionate quest for peace and justice, and an absolute determination to foster a scholarly environment welcoming to all people, perspectives, and voices. And, as the Institute grew over the ensuring decades, the humanistic and scholarly imprint left by Vartan Gregorian became all the more clear. Today, our work on arms control and security; social justice; Middle East (and especially Iranian and Afghan) studies, and the immigrant experience, just to name a few, all directly reflect the extraordinary legacies bestowed upon us by Vartan Gregorian.

Our Oct. 21 program “Fostering a More Peaceful and Just World” celebrates Vartan Gregorian’s ongoing inspiration not just to the Watson Institute, but to so many of us at Brown University and beyond.

Moderated by Edward Steinfeld, Howard R. Swearer Director of the Thomas J. Watson Institute for International and Public Affairs, Dean's Professor of China Studies, professor in the Department of Political Science, and director of the China Initiative.

Participants in this event:

John Friedman, Professor of Economics and International and Public Affairs
Chair of the Economics Department