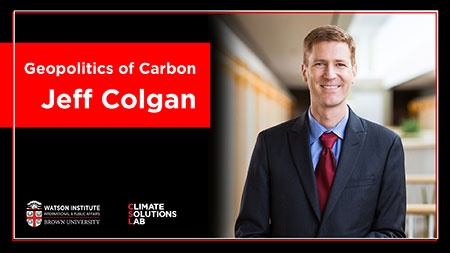 Carbon is an abundant element, but that doesn’t necessarily mean it’s sustainable. Professor Jeff Colgan considers the geopolitics associated with hydrocarbons — especially oil — and greenhouse gases like carbon dioxide. In both cases, carbon can be associated with a lot of political conflict.

This talk was originally delivered for the European Chemical Society (EuCS) conference on April 22, 2021.

Jeff D. Colgan is the Richard Holbrooke Associate Professor in the Department of Political Science and Watson Institute for Public and International Affairs, and Director of the Climate Solutions Lab at Brown University. His research focuses on international order, especially as related to energy and the environment.

Professor Colgan previously taught at the School of International Service of American University 2010-2014, and was a Fellow at the Woodrow Wilson International Center for Scholars in Washington DC in 2012-13. He completed his Ph.D. at Princeton University, and was a Canada-US Fulbright Scholar at UC Berkeley, where he earned a Master’s in Public Policy. Dr. Colgan has worked with the World Bank, McKinsey & Company, and The Brattle Group.