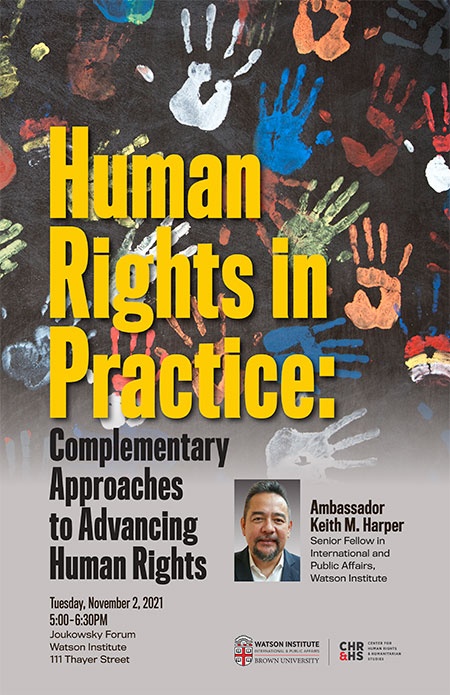 In this talk, Ambassador (ret.) Keith M. Harper will discuss practical methods of promoting human rights based on his prior experience as the US Ambassador to the UN Human Rights Council and his current legal efforts to hold Saudi Crown Prince Mohammed bin Salman accountable for the 2018 murder of journalist Jamal Khashoggi. Drawing from both domestic and international examples, Ambassador Harper will discuss three strategies for enforcing human rights: 1) the multilateral human rights system with an emphasis on both the UN Human Rights Council and the role of non-governmental organizations; 2) bilateral engagements between countries, including sanctions and human rights country reports; and 3) the litigation approach to advocacy efforts, including the unique role of the US Torture Victims Protection Act. Ambassador Harper will focus in on the efficacy of these various approaches as well as their complementary dynamics.

From 2010 to 2014, Ambassador Harper served as Commissioner on the President’s Commission on White House Fellowships. He also served as a chair for Native American policy in the 2008 Obama for America presidential campaign and then as a member of the Obama-Biden Presidential Transition Team in the Energy and Environment Cluster. Ambassador Harper was previously Senior Staff Attorney and head of the Washington, DC office of the Native American Rights Fund (NARF) from 1995 to 2006. During his tenure at NARF, he also taught Federal Indian Law as an adjunct professor at Catholic University, Columbus School of Law and at American University Washington College of Law. Ambassador Harper served as a Supreme Court Justice on the Supreme Court of the Poarch Band of Creek Indians from 2007 to 2008 and as an Appellate Justice on the Mashantucket Pequot Tribal Court from 2001 to 2007.