Identity Threat and Cyber Security: Czech Language and Identity in the Globalizing World 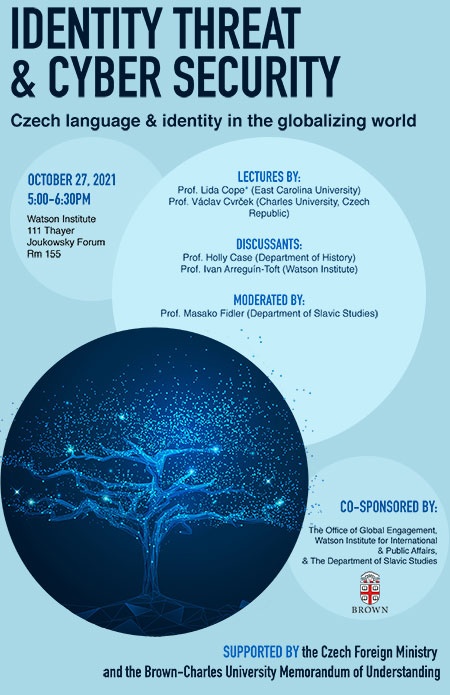 Disinformation in the Czech cyber space

Chaos in the current world is increasingly induced by soft methods, including dissemination of “alternative” framing of events. The Czech Republic is one of the hotspots of such disinformation. Prof. Cvrček’s talk will demonstrate that use of words and concepts instead of bullets can only be objectively studied by means of large databases of texts (language corpora) and with the help of modern statistical and computational methods.

Language and identity in the Czech diaspora

Prof. Cope addresses language shift and loss in the Czech diaspora spanning Europe, Russia, and the Americas. Focusing on the relationship between language and identity, she then draws on the data from historically Czech Moravian communities in Texas to discuss the effects of asymmetrical bilingualism and language loss on the construction of identity, finally to offer some observations on the fast-paced disappearance of the world’s indigenous and minority languages threatening an irrecoverable loss to diversity in today’s globalizing world.

Lida Cope is Professor of applied linguistics and sociolinguistics in the Department of English at East Carolina University in Greenville, North Carolina. Dr. Cope’s areas of expertise include first language attrition, language contact and diaspora, and language documentation. Her research examines the questions of language, culture, and identity in historically Czech Moravian communities in Texas. She directs the Texas Czech Legacy Project, aimed at documenting the unique Texas Czech dialect. Her recent publications include Language loss: Czech in the diaspora (with Robert Dittmann of Charles University, BRILL 2020) and Taking Stock and Looking Forward: Documenting a diasporic variety of Czech in Texas (forthcoming in Naše řeč [Our Language]).

Václav Cvrček is Associate Professor at the Institute of the Czech National Corpus, Charles University in Prague, Czech Republic. He focuses on corpus linguistics, quantitative analysis of language and corpus-based discourse analysis. Dr. Cvrček’s main interests involve corpus-based and corpus-driven methodologies, descriptive grammar of Czech and language variation. He is the leading author of the first corpus-based grammar of Czech (published in 2010) and together with Masako Fidler (Brown U) edited in 2018 a volume on using inflection in discourse and language studies (Taming the corpus: From Inflection and Lexis to Interpretation).

Supported by the Czech Foreign Ministry and the Brown-Charles University Memorandum of Understanding.

Co-sponsored by the Office of Brown Global Engagement, the Department of Slavic Studies, and the Watson Institute for International and Public Affairs.