Ivy Film Festival ─ Randall Poster: Meet The Man Behind the Music in Every Movie You Love 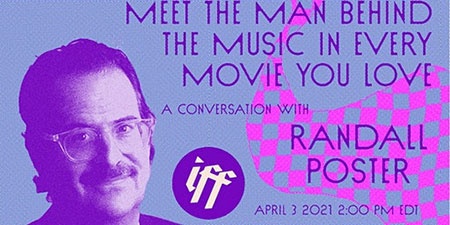 If you’ve watched any film by an A-lister director from Wes Anderson to Martin Scorsese, then you’ve heard the work of Randall Poster whom iconic directors depend on to identify, curate, and guide the music that enhances the storytelling of their films... from the Grand Budapest Hotel to SkyFall, The Aviator, The Wolf of Wall Street, the Irishman, Queen’s Gambit, Tiger King, and so many more!

Brown alumnus and double-Grammy winner, Randall Poster, is a master at weaving together music, visuals, and narrative and you’ll find Randall’s name all over the credits of directors from Scorsese and Anderson to Richard Linklater, Sam Mendes, Todd Phillips, and Todd Haynes to name just a few of the directors who rely on Randall’s impeccable music curation.

Even a casual perusal of Randall’s resume boggles the mind. His cross pop-culture defining projects include every Wes Anderson film from The Grand Budapest Hotel to The Royal Tenenbaums, plus Scorsese’s Hugo, The Aviator, The Wolf of Wall Street, and Pretend it’s A City; in addition to such other series and films including Queen’s Gambit, Tiger King, The Irishman, Divergent, Skyfall, Vinyl, Rushmore, Velvet Goldmine, Up In The Air, Revolutionary Road, School Of Rock, Zoolander, Meet the Parents, Far From Heaven, Lost, Fantastic Mr. Fox, Boardwalk Empire, and recently, The Devil of All Time… and the list goes on and on.