James Harmon '57 — Up and Doing: Two Presidents, Three Mistakes, and One Great Weekend―Touchpoints to a Better World 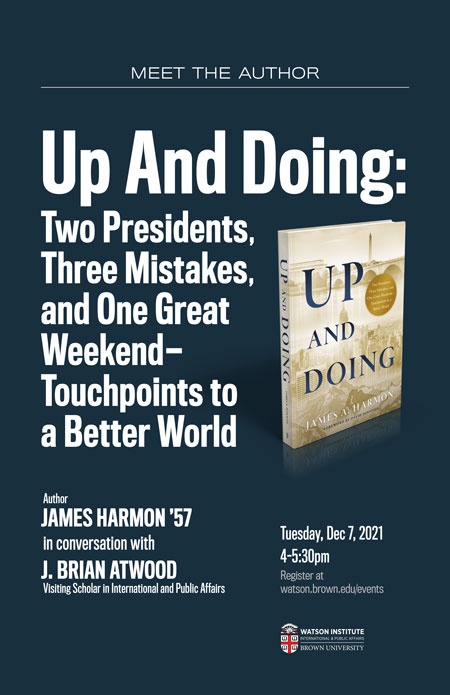 Author James Harmon '57 joins J. Brian Atwood, Visiting Scholar in International and Public Affairs, for a discussion of his new memoir, Up and Doing: Two Presidents, Three Mistakes, and One Great Weekend—Touchpoints to a Better World.

James Harmon has always had a passion for ambitious causes. As a banker, he successfully advised corporations, like Starbucks, and helped them to become cultural institutions. Dabbling in the movie and music industries, he found meaning in funding the art he felt would make people happy and add to the public good. His unique perspective on investment led him to the Clinton White House as head of EXIM Bank and, eventually, to Egypt, where he represented the State Department shortly after the Arab Spring. Still “up and doing,” today he cochairs the board of the World Resources Institute.

Not all of Harmon’s deals were successes, and he recounts the wins and losses in equal detail, exposing lessons learned, and even sharing a few farcical scenes featuring Washington’s and Wall Street’s most notorious bold-faced names.

No matter where he is replanted, Harmon advocates for global change by examining the issues of our time, including women’s financial empowerment and the urgent need to fight climate change. He encourages our leaders to apply lessons learned in the private sector to the world’s most demanding challenges, from helping a local community to electing a president or bolstering a developing African nation.

Up and Doing presents a tale of the deals that made Harmon a celebrated figure in the world of global investment, and shows that the best way to do well is by also doing good.

Purchase the book from the Brown Bookstore here.

James Harmon is chairman of the Egyptian-American Enterprise Fund, a private corporation seeded by government funds to promote the development of the Egyptian private sector.

Mr. Harmon is Co-Chair of the board of directors of the World Resources Institute, a global policyand research institution.

Nominated by President Clinton and confirmed by the US Senate in June 1997, he was the Chairman of the Export-Import Bank of the United States for the four years ended June 2001.

Prior to that he was Chairman and CEO of the investment bank Schroder Wertheim (1986-1996).

Mr. Harmon received a B.A. in English Literature from Brown University and an MBA in Finance from Wharton Graduate School.