James Reston, Jr.: The Nineteenth Hijacker: A Novel of 9/11 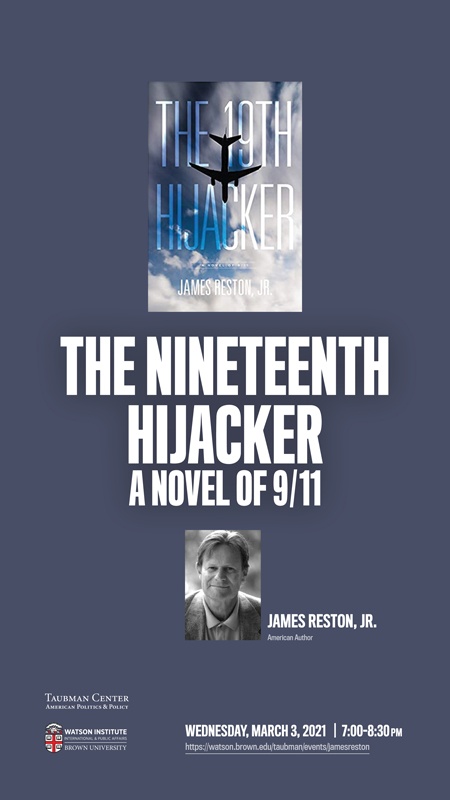 James Reston, is a prolific author and one of America’s leading men of letters. He is the author of 18 books ranging from politics to medieval history to science to baseball (his 1997 book examining the lives of Pete Rose and Bart Giamatti, the Commissioner of Baseball faced with the Rose gambling scandal, called "Collision at Home Plate.") He has also written three works of fiction.

He graduated in philosophy from the University of North Carolina in 1963, served three years in U.S. Army Intelligence and taught creative writing at UNC for ten years.

He will discuss his most recent book, a novel, The Nineteenth Hijacker. The author has chosen to use fiction as a way of exploring and understanding radical Islam. He has said, "I wanted to try to really understand one character, even if imagined, who could get recruited and undertake this horrific action through Islamic religious ideology… [Sept. 11] changed American history, and the clash of civilizations of Islam and Christianity was on nobody’s minds until then."

In a discussion with Interim Taubman Director, Professor Richard Arenberg, he will explore the themes of a number of his books including The Conviction of Richard Nixon: The Untold Story of the Frost/Nixon Interviews, Warriors of God: Richard the Lionheart and Saladin in the Third Crusade, Our Father Who Art in Hell: The Life and Death of Jim Jones and The Impeachment Diary: Eyewitness to the Removal of a President and their relevance for understanding America and our nation’s politics.